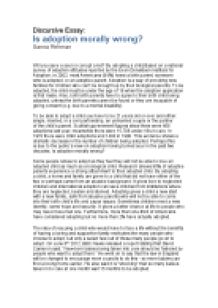 Is adoption morally wrong? Adoption is a controversial issue with many negative aspects attached to this sensitive topic.

﻿Discursive Essay: Is adoption morally wrong? Sanna Rehman Will you save a soul or corrupt a kid? By adopting a child,Based on a national survey of adoption attitudes reported by the Evan Donaldson Institute for Adoption, in 2002, most Americans (64%) knew a birth parent, someone who is adopted, or an adoptive parent. Adoption is a way of providing new families for children who can?t be brought up by their biological parents. To be adopted, the child must be under the age of 18 when the adoption application is first made. Also, both birth parents have to agree to their birth child being adopted, unless the birth parents cannot be found or they are incapable of giving consent (e.g. due to a mental disability). To be able to adopt a child you have to be 21 years old or over and either: single, married, in a civil partnership, an unmarried couple or the partner of the child?s parent. ...read more.

be fostered by people who want to adopt them.? He went on to say that the law in England will be changed to encourage more councils to do this - so more babies can find a loving home earlier. He also said it is "shocking" that so many babies taken in to care at one month wait 15 months to be adopted. Adoption is a controversial issue with many negative aspects attached to this sensitive topic. The infant adopted could grow up with trust issues or be teased while growing up. Adopted children could be bullied at school, especially if the child is part of an interracial adoption, perhaps because of an outside perception of the child seeming as though they do not fit in with their adopted family. If the adoption is a closed adoption then the child, when grown up, can feel a lack of ancestry and genetics because of sealed and inaccessible records, this could lead to low self esteem and self worth either because they do not feel worthy enough to have been kept or due to teasing and abandonment. ...read more.

Children, being at such a young age, cannot make decisions for themselves and so they cannot stand up and discourage the adoption. Instead strangers are being allowed to decide their fate and could possibly trigger off these social problems for the adopted child. The controversial aspects of Adoption bring a better understanding of how adoption works, and the controversy behind it. There will always be debates about the different types of adoption and whether one type is better than the other, even whether adoption is a good choice at all. Every child needs a family, but many adoptees would have rather stayed with their biological mother even when she couldn?t provide what the child needed. Others, on the other hand, are thankful that they were adopted, showing that many believe that adoption is not morally wrong. They feel that their biological mother wanted to do best for them, out of love. No matter the choices that are made, it is never possible to tell what the outcome may be, and that is the biggest controversial issue. 1055 words ...read more.