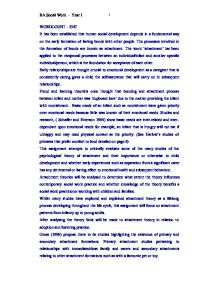 It has been established that human social development depends in a fundamental way on the early formation of lasting bonds with other people. The processes involved in the formation of bonds are known as attachment. The word 'attachment' has been applied

WORDCOUNT - 5347 It has been established that human social development depends in a fundamental way on the early formation of lasting bonds with other people. The processes involved in the formation of bonds are known as attachment. The word 'attachment' has been applied to the reciprocal processes between an individual/infant and another specific individual/person, which is the foundation for acceptance of each other. Early relationships are thought crucial to emotional development as a caregiver that is consistently caring gives a child the self-assurance that will carry on in subsequent relationships. Freud and learning theorists once thought that bonding and attachment process between infant and mother was 'cupboard love' due to the mother providing the infant with nourishment. Basic needs of an infant such as nourishment were given priority over emotional needs because little was known of their emotional needs. Studies and research, ( Schaffer and Emerson 1964) show basic needs are inter-related and inter-dependant upon emotional needs for example, an infant that is hungry will not eat if unhappy and may need physical contact as the priority. (See Harlow's studies of primates that prefer comfort to food detailed on page 6) This assignment attempts to critically evaluate some of the many studies of the psychological theory of attachment and their importance or otherwise to child development and whether early experiences such as separation from a significant carer has any detrimental or lasting effect to emotional health and subsequent behaviour. Attachment theories will be analysed to determine what extent the theory influences contemporary social work practice and whether knowledge of the theory benefits a social work practitioner working with children and families. Whilst many studies have explored and explained attachment theory as a lifelong process developing throughout the life cycle, this assignment will focus on attachment patterns from infancy up to young adults. After analysing the theory links will be made to attachment theory in relation to adoption and fostering practice. ...read more.

This led the researchers to believe that warm contact is of critical importance as a need for the monkeys and leads to affectionate responses. Critics of both these studies question the relevance of animal studies to human behaviour. Bowlby's influential theory managed to link together the evolutionary focus of adaptation with the psychodynamic and behavioural importance of social relationships during infancy and childhood. (Hollin 95) A measure of its influence can be gained from the action of the World Health Organisation in 1955 stating that "Permanent damage can be done to the emotional health of babies and children when put into nurseries or sent to child-minders." The WHO report had many consequences and resulted in lots of practices regarding child care and children's needs being changed. Women were encouraged to stay at home and were made to feel guilty and bad mothers if the went out to work. (Which suited the government at the time, as they needed these vacated jobs for men) Family Allowance payments were also introduced as a further inducement to keep women from going out to work Maternity wards encouraged siblings to stay with their mother, whilst children's wards encouraged mothers to stay. A main influence on social work practice was the idea that ' a bad home is better that the best institution' which resulted in less fostering and removal of children from poor if not dangerous situations at home. Bowlby's findings were influential but controversial and became the starting point for further studies. Some studies began to disagree with Bowlby, Fraiberg in 1974 argued that it was possible to strengthen an attachment; Parents of blind children who did not experience eye contact with their infant felt rejected and consequently were unable to develop a strong attachment to their children. When taught to interpret their child's hand movements, it was found the bond could be strengthened. Interaction was thought to be the important element in developing the attachment. ...read more.

Both studies are instances when attachment theory can be used constructively if abuse or neglect is suspected e.g. if the child has to experience a separation then understanding that they may blame themselves (it has happened because I am bad), can be pre-empted with coping strategies already in place to help the child manage their emotions without delay e.g. appropriate counselling. Both studies are also examples of how attachment theory has given an insight into otherwise unexplainable behaviour e.g. that children have and develop defensive mechanisms in order to better manage the psychological stress that occurs when close relationships are unreliable and unpredictable. (Goffman 1969) In conclusion it can be said that attachment theory offers a valuable perspective on the development of feelings and behaviours relating to human needs. It also deals with the impact of separation and loss and explains their significance to emotional development and subsequent well being. It is clear Bowlby's theory had a major impact and has influenced and initiated further research into an otherwise unexplored areas. To pull the theory and practice together, it can be said that attachment theory is useful in four different but complimentary ways. 1. In understanding universal reactions. 2. Understanding individuals different reactions. 3. Understanding the nature and impact of lost relationships. 4. Understanding appropriate coping strategies. As a consequence of this wealth of knowledge attachment theory has allowed optimism to develop towards caring for children as a less distorted and confused picture of child development has emerged. It is now apparent that healthy development can occur in many different family environments. There are many 'right' ways of meeting children's needs. Stressful experiences can be minimised by effective action on the part of the care practitioners involved. Traumatic events do not have to have lasting or damaging consequences if positive action is taken. Children are more resilient and adaptable than was once thought. Productive and meaningful placements can be effected through knowledge of children's needs. Children being 'looked after' need not be disadvantaged if 'quality care' is obtained. ...read more.