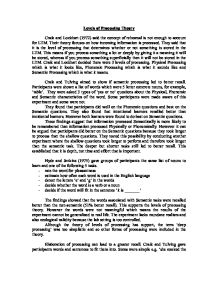 Craik and Tulving aimed to show if semantic processing led to better recall. Participants were shown a list of words which were 5 letter concrete nouns, for example, ‘table’.  They were asked 3 types of ‘yes or no’ questions about the Physical, Phonemic and Semantic characteristics of the word. Some participants were made aware of this experiment and some were not.

These findings suggest that information processed Semantically is more likely to be remembered than information processed Physically or Phonemically. However it can be argued that participants did better on the Semantic questions because they took longer to process than the shallow questions. They tested this possibility by conducting another experiment where the shallow questions took longer to perform and therefore took longer than the semantic task. The deeper but shorter tasks still led to better recall. This established that it is depth, not time and effort that is important.

Hyde and Jenkins (1975) gave groups of participants the same list of nouns to learn and one of the following 5 tasks.

The findings showed that the words associated with Semantic tasks were recalled better than the non-semantic (51% better recall). This supports the levels of processing theory. However the words were not meaningful which means the results of the experiment cannot be generalised to real life. The experiment lacks mundane realism and also ecological validity because the lab setting is too controlled.

Elaboration of processing can lead to a greater recall. Craik and Tulving gave participants words and sentences to fit them into. Some were simple e.g. ‘she cooked the ______’ and some were complex e.g. ‘the great bird swooped down and carried off the struggling _______’. Recall was twice as high for the complex sentences which suggest that elaboration benefits LTM. This means we are more likely to remember something we elaborate on.

Another form of processing is Distinctiveness. Memory traces that are unique or distinctive will be more memorable than memory traces that are similar to other things. A study carried out in 1979 by Bransford compared participants recall of the sentence ‘a mosquito is like a racoon because they both have hands, legs and jaws’ which is elaborative, with ‘a mosquito is like a doctor because they both draw blood’ which is distinctive). Recall was found to be higher for distinctive processing which means different things are more memorable.

Organisation creates a lasting memory trace and no conscious processing needs to take place meaning it is a necessary condition for memory.

An advantage to the Levels of Processing theory is that it has practical applications because you can use the knowledge of the theory in everyday life. It can help people to improve their memory. The theory links memory, attention and perception and the learning process. They are all included to give a more realistic view of memory. The theory doesn’t just focus on structure of memory.

However the theory describes rather than explain reasons for why we recall better semantically or why elaboration benefits recall. Also, it is difficult to measure depth because LOP is a circular argument. Being able to remember relies on depth therefore semantic processing must be deep. Our only evidence for depth is that material is more memorable. Another problem with the LOP theory is that participants in the research studies may process words differently to how they are intended. For example, a participant may be asked to count the number of letter ‘a’s in the word ‘cat’ which is a shallow processing task. However a cat lover may process the word at a deep level by thinking ‘must remember to buy some cat food later’. This means that participants who own cats give the word meaning even if it is not intended.