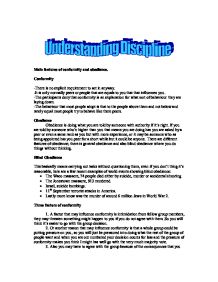 Main features of conformity and obedience. Conformity -There is no explicit requirement to act in anyway. -It is only normally peers or people that are equals

Main features of conformity and obedience. Conformity -There is no explicit requirement to act in anyway. -It is only normally peers or people that are equals to you that that influences you. -The participants deny that conformity is an explanation for what sort of behaviour they are laying down. -The behaviour that most people adopt is that to the people above them and not below and rarely equal most people try to behave like there peers. Obedience Obedience is doing what you are told by someone with authority if it's right. If you are told by someone who's higher than you that means you are doing has you are asked by a peer or even a same rank as you but with more experience, or it may be someone who as being appointed has you peer for a short while but it could be anyone. There are different features of obedience; there is general obedience and also blind obedience where you do things without thinking. Blind Obedience This basically means carrying out tasks without questioning them, even if you don't thing it's reasonable, here are a few recent examples of world events showing blind obedience: * The Waco massacre, 74 people died either by suicide, murder or accidental shooting * The Jonestown massacre, 913 murdered. ...read more.

3. The third factor that may influence obedience is that the man who is getting told by is peer to do something may feel it's is duty to do what ever he is telling him and therefore that is a factor that could trigger obedience. If the mans thinks that he has to listen to people with more power at all times this will automatically trigger obedience. Meaning of authority in relation to public services. The definition of authority- the power to enforce laws. All public service groups have leaders, so they are all kept disciplined and ready for any tasks they may be called up to do. Without a leader it would be Chaos because nobody would be putting them into any kind of order. If there's nobody enforcing the rules the rules are just on paper, but if there's a leader enforcing them you will be forced to obey the written rules. The police have the police authority's order of 2001 which orders a code of conduct for the police, it came into force for England and Wales on 27th November 2001. Also the Lancashire fire brigade adopted a code of conduct from the 22nd April 2002. ...read more.

Positive and Negative effects of Blind obedience Negative Blind obedience has many negative effects. It can dehumanise people making them behave in awful ways, referring them to robots or machines. In suicide attacks, the first negative effect is the deaths and maiming of innocent people. Next there are the psychological effects on the grieving families and friends of victims. In addition to these there are long term effects, which include fear and inconvenience that millions of people have to put up with because of the security risks and security measures that result in terrorism. There are also costs of war which are negative, in the war on terror $100 billion has been spent from America alone so far, this could have easily been spent on something else like saving lives through treatment. Positive There aren't much positive effects to blind obedience; there are definitely more negative effects. Many people that die in acts of blind obedience believe they will go to heaven or a better place than this world. The only positive effect of the holocaust is that it has inspired the world to try to make sure that such a crime never takes place again. Four types of authority On type of authority is dictatorship, which is powered by intimidation. ...read more.