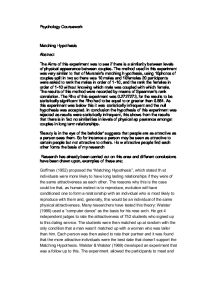 Psychology Coursework Matching Hypothesis Abstract The Aims of this experiment was to see if there is a similarity between levels of physical appearance between couples. The method used in this experiment was very similar to that of Murstein's matching hypothesis, using 10photos of couples split in two so there was 10 males and 10females 20 participants were asked to rank the males in order of 1-10, and the rank the females in order of 1-10 without knowing which male was coupled with which female. The results of this method were recorded by means of Spearman's rank correlation. The Rho of this experiment was 0.2727273, for the results to be statistically significant the Rho had to be equal to or greater than 0.564. As this experiment was below this it was statistically infrequent and the null hypothesis was accepted. In conclusion the hypothesis of this experiment was rejected as results were statistically infrequent, this shows from the results that there is in fact no similarities in levels of physical appearance amongst couples in long term relationships. 'Beauty is in the eye of the beholder' suggests that people are as attractive as a person sees them. So for instance a person may be seen as attractive to certain people but not attractive to others. ...read more.

If the correlation is above 0.564 then it is off significance. In the research there were 20particpants 10male and 10female, these people were then asked to rank both the male and the females in order of physical appearance, 10 being the most attractive 1 being the least attractive. The participants used were all of the same age range of 16-19 and were the students of the 6th form in the UK. The majority were British, white and middle class, but some participants asked were foreign. This experiment used a random sampling method, participants were asked for consent before any questions were asked, and as all participants asked were over the age of 16 parental consent was not required. The materials used in the experiment were 10photos obtained from the Internet; these photos of couples were cut into 2, leaving 10photos of the males and 10 of the females. The photos were small and black and white. In the experiment there were written instructions for participants to follow after they had been selected at random from a group of 6th formers. By doing this we reduced the participant/experimenter interaction so therefore the experiment is less likely to be bias. The experiment involved the experimenter taking random people from a study room and asking their consent and then asking them to complete the experiment in isolated conditions in the experimenter's room. ...read more.

It may have also been better to use self rating as means of recording levels of physical appearance, by using a ranking system couples may have been graded wrong because the participant simply did not know where to rank them. There were many anomalous results and flaws in the research outlined above could be the main reasons for the insignificant correlation. In practical terms these results suggest that couples in long term relationships are not similar in levels of physical appearance, this could be useful information for dating agencies as it would suggest matching couples with similar interests and personalities rather than looks. It may also give relationship counselling useful information as it could suggest working on improving interests, as that is a more important factor in relationships. Further research needs to be conducted on this area, as these results may be statistically infrequent because of flaws in the method and designs for this experiment. The results may be totally different if conducted in a different culture or within a different sample population, for instance in some cultures it may be closer to the animal kingdom in a sense that females want to mate with the most powerful male, or if the experiment was conducted on a different age group such as people in their 30s results may have been more consistent. . ...read more.