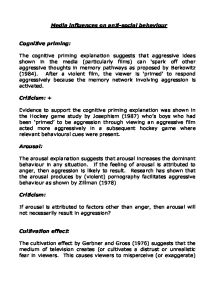 Media influences on anti-social behaviour Cognitive priming: The cognitive priming explanation suggests that aggressive ideas shown in the media (particularly films) can 'spark off other aggressive thoughts in memory pathways as proposed by Berkowitz (1984). After a violent film, the viewer is 'primed' to respond aggressively because the memory network involving aggression is activated. Criticism: + Evidence to support the cognitive priming explanation was shown in the Hockey game study by Josephism (1987) who's boys who had been 'primed' to be aggression through viewing an aggressive film acted more aggressively in a subsequent hockey game where relevant behavioural cues were present. Arousal: The arousal explanation suggests that arousal increases the dominant behaviour in any situation. If the feeling of arousal is attributed to anger, then aggression is likely to result. Research has shown that the arousal produces by (violent) pornography facilitates aggressive behaviour as shown by Zillman (1978) Criticism: If arousal is attributed to factors other than anger, then arousal will not necessarily result in aggression? ...read more.

Criticisms: + 1) there is a lot of experimental evidence to support the social learning theory explanation. Bandura et al (1963) study into the imitation of film - mediated aggressive models showed that children who observe a model behaving aggressively towards a Bobo doll subsequently behave more aggressively than those who see the model punished for their actions. This well controlled experiment and the identification of specific learned responses provides good evidence for imitative leaning. - 2) The sample characteristics were unrepresentable (only children from a university nursery) and the study has been criticised for lacking ecological validity. + - 3) The study did not really measure real aggression (a Bobo doll is designed to be hit) and only short term effects of the media was assessed. However Hicks (1965) found that 40% of models acts were reproduced up to eight months after one showing of a 10 minute film. - 4) The study has also been criticised for its ethical stance, where children were encouraged to be aggressive. ...read more.

They were then asked to participate in a study involving bargaining with a fellow participant (actually a confederate). Findings: Those who had heard the pro - social news were more likely to be co-operative in their bargaining, particularly if the news story involved an account of someone who has intentionally given help. Baron (1979) Found that children who watched an episode of the 'Walton's' were more co-operative in game playing afterwards than were control groups. Criticisms: + 1) pro social programmes can be effective. Hearold (1986) analysed over 100 studies and found that pro- social programmes do foster pro - social behaviour in children. This is particularly true if there is no accompanying violence in the programme. - 2) Effects may be short-lived. Many studies look at behaviour immediately after the programme is shown. Research indicates that the effects of a single programme ay be short - term, especially in younger children. + 3) Regular watching may have longer lasting effects. Despite this, Friedrich and Steins study (1973) indicates that regular watching may have longer lasting effects. ...read more.

The writer has crammed quite a lot of information into this work and has covered a great deal. There are areas where the writer could have given fuller explanations and this would have improved the final score. The writing is rather disjointed in places and a plan would have helped the writer to organise the writing more effectively. The media element of the writing should have included studies about video games, magazines and films as well as television.