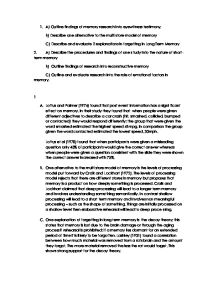 1. A) Outline findings of memory research into eyewitness testimony. B) Describe one alternative to the multi store model of memory C) Describe and evaluate 2 explanations in forgetting in Long Term Memory 2. A) Describe the procedures and findings of one study into the nature of short-term memory B) Outline findings of research into reconstructive memory C) Outline and evaluate research into the role of emotional factors in memory. 1 A. Loftus and Palmer (1974) found that post event information has a significant effect on memory. In their study they found that when people were given different adjectives to describe a car crash (hit, smashed, collided, bumped or contacted) they would respond differently; the group that were given the word smashed estimated the highest speed 41mpg. In comparison the group given the word contacted estimated the lowest speed, 30mph. Loftus et al (1978) found that when participants were given a misleading question only 45% of participants would give the correct answer whereas when people were given a question consistent with the slide they were shown the correct answer increased with 75%. B. One alternative to the multi store model of memory is the levels of processing model put forward by Craik and Lockhart (1972). ...read more.

2. A. Baddeley (1966) tested four groups on short term memory, each hearing one of the four lists, acoustically similar, acoustically dissimilar, semantically similar or semantically dissimilar. The list was repeated 4 times and then asked to recall them in the correct order Baddeley found that participants with acoustic similarity did worst; recall for this list was 55% whereas recall for the other three lists was 75% B. Bartlett (1932) found that when participants were given a story from a different culture and asked to recall it they would change the story to match their own culture; Bartlett found that the order would be changed and that there would be alterations in importance. He then found that over time there would be more alterations, so much so that eventually the story would resemble an English story. Bransford and Johnson (1972) also found that when participants were given the title "making and flying a kite" they had better recall of a text to a group that didn't showing that the title became a schema and helped encode the information. C. Williams (1994) interviewed over 100 women who had attended city hospital emergency room 20 years ago for sexual assault. ...read more.

At age four, 24 children had been adopted, 15 returned to their homes and the rest remained in the institution. At age 16 the sample was 39 children who were given questionnaires and the children, parents and teachers were interviewed. They found that at age 16 the restored group were less likely to be closely attached then adopted children. All of the ex-institutional children were less likely to have a special friend, to be part of a crowd or to be liked by other children; they were more likely to be bullies. This supports the maternal privation hypothesis; early privation had a negative effect on the child. However, this research carries many flaws; the main one being attrition, in a longitudinal study people drop out and that creates a possible bias sample, a reason for dropping out in this study can be because you are less well adjusted and the researchers have to then be careful about the conclusions drawn from the research. It is also important to raise the problem that adopted children may have been the nicer ones, which is why they were adopted; this will also change the results as the "bad" children may have been left at the institution. This will act as a confounding variable as it adds another independent variable. Therefore cause and effect cannot be inferred from this study ...read more.