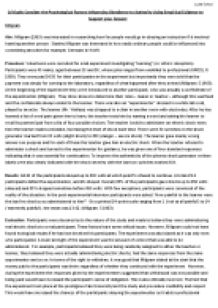 ﻿Luke Schol Critically Consider the Psychological Factors Influencing Obedience to Authority Using Empirical Evidence to Support your Answer Milgram Aim: Milgram (1963) was interested in researching how far people would go in obeying an instruction if it involved harming another person. Stanley Milgram was interested in how easily ordinary people could be influenced into committing atrocities for example, Germans in WWII. Procedure: Volunteers were recruited for a lab experiment investigating ?learning? (re: ethics: deception). Participants were 40 males, aged between 20 and 50, whose jobs ranged from unskilled to professional (GROSS, R. 1999). They were paid $4.50 for their participation in the experiment but importantly they were told that the payment was simply for coming to the laboratory, regardless of what happened after they arrived (Milgram. S 1963). At the beginning of the experiment they were introduced to another participant, who was actually a confederate of the experimenter (Milgram). They drew straws to determine their roles ? leaner or teacher ? although this was fixed and the confederate always ended to the learner. There was also an ?experimenter? dressed in a white lab coat, played by an actor. The learner (Mr. Wallace) was strapped to a chair in another room with electrodes. After he has learned a list of word pairs given him to learn, the teacher tests him by naming a word and asking the learner to recall its partner/pair from a list of four possible choices. ...read more.

In the questionnaire 10/12 graduates said they would not have followed the order and 7 mentioned reasons including the dosage discrepancy, hospital policy and need for written permission. All 21 of the student nurses said they would not have followed the order. However, the reality was that 95% or 21/22 nurses obeyed without hesitation even though when questioned later 11 said that they had noticed the dosage discrepancy. Many mentioned that emergency calls like this were quite common, no one asked for written consent but most asked the doctor to hurry. Only one nurse questioned the doctor?s identity and why he was on their ward (Hofling et al 1966). Evaluation: One of the strengths of this study is that it has high levels of ecological validity, due to the fact it was conducted in a real life environment. However, the study broke the ethical guideline of deception, as neither the doctor nor the drug was real. Although the nurses believed that they would not obey a doctor if it was at jeopardy to the health of a patient but 95% of them did. This indicates that although their intentions were to obey hospital rules and medical ethics, when placed in a situation where an authority figure is instructing them to perform a task that contradicts this, they would go ahead and perform the instruction. ...read more.

(It is in fact a simulation of what we expect prison life to be, rather than what it is, as none of the participants had previously been in prison as a guard or prisoner). The prisoners were de-individuated by being stripped of their individuality, their name, dress and appearance. The prisoners became de-individuated not only to the guards, but to themselves. This encouraged them to act together and to have less of an individual personality taking the role of prisoner more seriously without questioning the ethical side of it. One of the factors which would have had a huge impact on this was the guards wearing sun glasses. The lack of eye contact makes it difficult for the prisoners to interact with the guards on a mutual level as all the prisoners see is a ?guard? as opposed to an individual. Because of this behaviour in the prisoners, the guards adopted their role much easier because they were treated as guards by the prisoners so it was easy for them to slip into the role of prison guard. The prisoners also took it more seriously due to the fact they were unexpectedly arrested at their homes and taken to the prison making the situation much more real. The fact it was held at a university would have added to this professionalism. GROSS, R. (1999) Key Studies in Psychology, 3rd Edition. London: Hodder and Stoughton BANYARD, P. AND GRAYSON, A. (2000) Introducing Psychological Research; Seventy Studies that Shape Psychology, 2nd Edition. London: Macmillan ...read more.