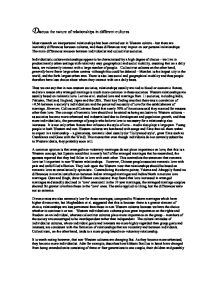 Nature of Relationships in different cultures

Discuss the nature of relationships in different cultures Most research on interpersonal relationships has been carried out in Western culture - but there are inevitably differences between cultures, and these differences may impact on our personal relationships. The main differences are seen between individualist and collectivist societies. Individualistic culture relationships appear to be characterised by a high degree of choice - we live in predominantly urban settings with relatively easy geographical and social mobility, ensuring that on a daily basis, we voluntarily interact with a large number of people. Collectivist cultures on the other hand, generally have fewer large urban centres -although this could be debated - Mumbai is the largest city in the world, and the forth largest urban area. There is also less social and geographical mobility and thus people therefore have less choice about whom they interact with on a daily basis. Thus we can say that in non-western societies, relationships usually are tied to blood or economic factors, and are a reason why arranged marriage is much more common in these societies. Western relationships are usually based on romantic love. Levine et al. studied love and marriage from 11 societies, including India, Pakistan, Thailand, England, Japan and the USA. ...read more.

Collectivism, on the other hand, leads to a more group based non-voluntary relationship. It is worth noting however, that non-Western cultures are changing fast. As they become more urbanised, they become more individualist. Adar for example, describes how kibbutz families in Israel have changed from being extended units consisting of three or four generations to one couple, their children and possibly one parent. This means that non-Western relationships are becoming less collectivist, and cultural changes are an important force in the formation of relationship. Hsu suggested another difference between Western and non-Western cultures, that of continuity and discontinuity. Using a comparison of Chinese and USA societies, Hsu describes the Chinese regard for heritage and ancestry, and the suspicion with which change is generally viewed. On the other hand, American culture emphasises progress, and change is seen as inevitable and important. Things that are 'old-fashioned' are generally viewed with disdain in this capitalist society. However, when describing Western relationship style as discontinuous we must note that this is a relatively recent phenomenon. Fifty years ago, divorce was rate in the West, and extended family groups more common. ...read more.

In such cultures, failure to return a favour is seen as failure of one's moral duty. Argyle noted that in Japanese culture, there are specific rules about gift-giving and reciprocating whereas no such formal norms exist in Western culture. Rules also differ. Work by Argyle et al. examined the presence and nature of relationship rules in the UK, Italy, HK and Japan. They found differences in that different rules e.g. rules for close friendships were seen as being relevant to different relationships across the four cultures, but there were also important similarities. All cultures acknowledged the importance of relationship rules such as showing courtesy and respect and avoiding social intimacy. Argyle et al. concluded that rules function to maintain relationships so that the specific goals of those relationships can be achieved. Friendship relationships also differ greatly. Goodwin pointed out that people in collectivist societies tend to have fewer but closer friendships than do people in individualistic societies. For example, Salamon studied friendship in Japan and in West Germany. Japanese friendships were much more likely to be ones in which there were no barriers between the friends, so that very personal information could be discussed freely - known as the 'shin yin' relationship. . ...read more.