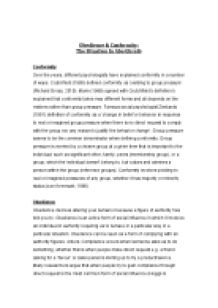 Transfer-Encoding: chunked ﻿Obedience & Conformity: The Situation In Abu Ghraib Conformity Over the years, different psychologists have explained conformity in a number of ways. Crutchfield (1995) defined conformity as ?yielding to group pressure? (Richard Gross, 2010). Mann (1969) agreed with Crutchfield?s definition b explained that conformity takes may different forms and all depends on the motives rather than group pressure. Famous social psychologist Zimbardo (1991) definition of conformity as a ?change in belief or behavior in response to real or imagined group pressure when there is no direct request to comply with the group nor any reason to justify the behavior change?. Group pressure seems to be the common denominator when defining conformity. Group pressure is exerted by a chosen group at a given time that is important to the individual; such as significant other, family, peers (membership group), or a group, which the individual doesn?t belong to, but values and admires a person within the group (reference groups). Conformity involves yielding to real or imagined pressures of any group, whether it has majority or minority status (van Avermaet, 1996) Obedience Obedience involves altering your behavior because a figure of authority has told you to. Obedience is an active form of social influence in which it involves an individual in authority requiring us to behave in a particular way in a particular situation. Obedience can be seen as a form of complying with an authority figures orders. ...read more.

Gustav Le Bon described this process as de-individuation, a state in which an individual in a group loses awareness of themselves as a separate individual. The prison guards de- individuation occurred from the result of them taking on the role of guards and having being in authority over the detainees. (Henry Gleitman et al, 2007) Group Polarization is a tendency for group decisions to be more extreme than the decision that would have been made by any of the group members working as individuals. Group polarization was evident in the Abu Ghraib situation as when one individual from the group came up with a torturing idea the rest followed in his example. A factor leading to group polarization are when people generally try to conform to the other member of the group both in the way they behave and to the attitudes they expressing. (Ibid) The military police were told that the detainees were the worse of the worse and the information they help would save lots of lives and have global impact. (Ghost of Abu Ghraib) The military police feeling that the detainees were against them and were their enemy united them close to each other and felt like this was a justification to their actions. Group members will do what they and to promote the sense of group cohesion, as a result doubt or disagreements are downplayed and enemies are stereotyped e.g. ...read more.

Atkinson et al., 1990) Conclusion Social influence is central to human interaction and communal life. Cooperation, community, altruism and love all involve social influence. Obedience and conformity is learnt from a very young age. We hear or come across commands, instructions, directions and orders everyday. From a young age children and taught to be obedient to their person and teachers. As we grow older we follow orders, rules and instruction at schools, university, workplace and even in public areas. E.g. crossing the road when the green man flashes and smoking in designated areas etc. Conformity is in our everyday life as we go through life whether we are conforming to school uniform, conforming at work or even queuing up in a shop. This has been engraved into us as a part of social influence and social norms, therefore making it easier for us to conform to authority or social influence even in a situation like Abu Ghraib. Zimbardo?s stated that his famous Stanford university experiment was an eye opener for situation like Abu Ghraib and explains how good people turn evil as the ?The Lucifer effect?. Zimbardo argues that good people can turn evil if there is enough social influence and when they are playing a role of authority. ??People are always personally accountable for their behavior.. if the killing can be shown to be a product of the influence of a powerful situation within a powerful system, than its as if they are experience diminished capacity and have lost their free will or their full reasoning capacity??. (Philip Zimbardo, Wired). ...read more.