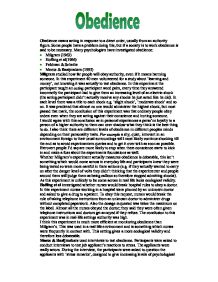 Obedience means acting in response to a direct order, usually from an authority figure. Some people have a problem doing this, but if a society is to work obedience is said to be necessary. Many psychologists have investigated obedience:

Obedience means acting in response to a direct order, usually from an authority figure. Some people have a problem doing this, but if a society is to work obedience is said to be necessary. Many psychologists have investigated obedience: * Milgram (1963) * Hofling et al(1966) * Feldman & Scheihe * Meeus & Raaijmakers (1995) Milgram studied how far people will obey authority, even if it means harming someone. In this experiment 40 men volunteered for a study about 'learning and money', not knowing it was actually to test obedience. In this experiment the participant taught an acting participant word pairs, every time they answered incorrectly the participant had to give them an increasing level of an electric shock (the acting participant didn't actually receive any shocks he just acted like he did). In each level there was a title to each shock e.g. 'slight shock', 'moderate shock' and so on. It was predicted that almost no one would administer the highest shock, but most passed that mark, the conclusion of this experiment was that ordinary people obey orders even when they are acting against their conscience and hurting someone. ...read more.

The conclusion to this experiment was in real-life settings authority was high. I think this experiment is much more efficient at monitoring obedience than Milgram's. This was used in a real life environment and is something which nurses were frequently in contact with. This setting gives a more ecological validity and therefore less debateable. Meeus & Raaijmakers used interviews to test obedience. Participants were asked to conduct interviews to test job applicant's reactions to stress. The applicants were really actors. During the interview, the participants were asked to question the applicants with 'stress remarks', designed to give increasing levels of psychological harm. The applicants acted confident at first then broke down as the questions grew more intense. Despite the psychological difficulties the applicants were facing most participants asked all of the questions. In conclusion more people were prepared to inflict psychological harm in this realistic situation. I don't think this experiment was totally loyal to the 'realistic' value it was given, its not likely to go to an interview to suffer from such harsh questions, once again I believe the personality of the person is at influence over the results but not as intensely as in Milgram's experiment. ...read more.

Thus proving my point on Milgram's study, that people are less susceptible to inflicting shocks, depending on other people's perceptions on them who are there to watch their actions. I think that conformity is a big issue with obedience of different people. Apart from the above experiments there are many different fields to monitor an individual obedience level. If a society makes rules on how to live there is usually a select majority of that group who think differently and go from their own perceptions and views. People not conforming to rules isn't usually a bad thing, depending on people judging them. The biggest issues of conformity and obedience to those rules are put into social circles. The vast majority of people need to have rules to follow and a social crowd to fit into, they can't cope being singled out as a non conformer as they see this as a very bad thing. The minority of people just do as they wish careless to weather they fit in with a specific crowd or not. The human psychological mind craves to be accepted and will obey those of their social groups orders in order not to be singled out to a non conformist. ?? ?? ?? ?? ...read more.