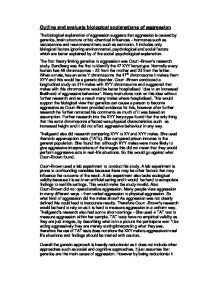 Outline and evaluate biological explanations of aggression The biological explanation of aggression suggests that aggression is caused by genetics, brain structure or bio-chemical influences - hormones such as testosterone and neurotransmitters such as serotonin. It includes only biological factors ignoring environmental, psychological and social factors which are better explained by of the social-psychological explanation. The first theory linking genetics to aggression was Court-Brown's research study. Sandberg was the first to identify the 47 XYY karyotype. Normally every human has 46 chromosomes - 23 from the mother and 23 from the father. When a male, has an extra Y chromosome the 47th chromosome it makes them XYY and this would be a genetic disorder. Court-Brown conducted a longitudinal study on 314 males with XYY chromosome and suggested that males with this chromosome would be better hospitalised 'due to an increased likelihood of aggressive behaviour'. Many institutions took on this idea without further research and as a result many males where hospitalised. This would support the biological view that genetics can cause a person to become aggressive as Court-Brown provided evidence for this, however after further research he further retracted his comments as much of it was based on assumption. Further research into the XYY karyotype found that the only thing that the extra chromosome affected was physical characteristics such as increased height and it did not affect aggressive behaviour in any way. ...read more.

They may be other factors other that genetics that play a role in aggression for example, a person's up-bringing may cause them to act aggressively or the type of culture they belong to may also play a part so to improve its explanation the genetic theory could input some of these ideas into the theory. Another theory from the biological approach which suffers similar problems like reductionism and determinism is the hormonal/neurotransmitter approach. The approach argues that high levels of the hormone testosterone lead to aggression while low levels of the neurotransmitter serotonin lead to aggression. Wagner et al. did research which supported the link between aggression and testosterone. They castrated mice and found that levels of aggression decreased and that there was also a drop in male typical behaviours such as biting. When the mice received testosterone injections levels of aggression started to increase. This would support the view that levels of testosterone can lead to aggression. Another study in this area was by Harrison, he gave male participants aged 20 -56 testosterone injections and then gave them a frustrating game to play. He noted that aggression did increases in all of the men but to differing extents. Furthermore affects were mainly psychological and there were few physical affects. ...read more.

This would make the explanation deterministic. Brain structure can also play a part in aggression particularly when there is damage to the brain. Phineas Gage is an example of how damage to the brain can cause a individual to behave more aggressively. After an accident involving his head and a tamping iron, Phineas Gage went from being mild-mannered to showing very aggressive behaviour. This suggests that certain parts of the brain can alter aggression. However this is only true of one individual. Gage's case was very unique in that in can never be replicated as it would obviously be unethical and also there will never be an exact case like it. So generalising the findings would be very limited. In conclusion, the biological explanation seems to have a high emphasis on nature and focuses mainly on the biological factors that may cause aggression. Aggression can not be caused by biological factors alone, there must be other influences and explanations as to what causes aggression. The explanation ignores these making it reductionist. It could include psychodynamic causes, social and environmental and also cognitive explanations to further improve on the explanation. Also aggression can not just be put down to one cause - even if a person has high levels of testosterone and low levels of serotonin it does not mean that they are going to behave aggressively. Aggression may also depend on situations and events that occur so it cannot only be put it all down to biological influences. ...read more.

This essay has covered most aspects of the biological argument for aggressive behaviour in humans. The writer has cited various studies and has also added some criticism of these. The referencing needs to be improved as well as the introduction. However, the writer has both outlined and evaluated the biological explanation of aggression.