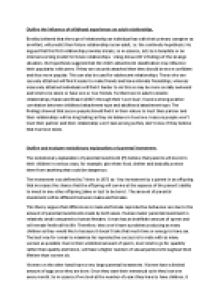 ﻿Outline the influence of childhood experiences on adult relationships. Bowlby believed that the type of relationship an individual has with their primary caregiver as an infant, will predict their future relationships as an adult, i.e. the continuity hypothesis. He argued that this first relationship provides a basis, so in essence, acts as a template or an internal working model for future relationships. Using Ainsworth?s findings of the strange situation, the hypothesis suggests that the child?s attachment classification may influence their popularity with peers. If they are securely attached then they should be more confident and thus more popular. This can also be used for adolescent relationships. Those who are securely attached will find it easier to make friends and have intimate friendships, whereas insecurely attached individuals will find it harder to do this so may be more socially awkward and tend to be alone or have one or two friends. Furthermore in adult romantic relationships, Hazan and Shaver (1987) through their ?Love Quiz?, found a strong positive correlation between childhood attachment type and adulthood attachment type. The findings showed that secure people should find it in their nature to trust their partner and their relationships will be long lasting as they do believe in true love. ...read more.

As women invest so much, they want their offspring to have as many resources as possible and good genes will provide a good immune system. Men on the other hand have a low PI so try to go for as many women as possible, as well as trying to go for young women as this shows signs of fertility and health. Alongside to this, it helps us understand differences in jealousy. It allows us to comprehend why men are more concerned about sexual infidelity whereas women are more concerned about emotional infidelity. If a man?s partner sleeps with someone else they raise the risk of raising someone else?s child. This is devastating for them as they are wasting their resources for someone that doesn?t even share their genes. Women don?t have this problem as they know it?s their child. However, if a man falls in love with someone else, then the resources will be shared amongst them. This will cause major repercussions for the women as they won?t receive all the attention they did before, the money will be shared so their lifestyle will have to change and the child will also get less attention from the father. ...read more.

They have evolved to have large testicles to provide sufficient sperm. Gorillas on the other hand have small testicles compared to their body size because females are monogamous so there is little competition. Human males have medium sized testicles by primate standards. Baker and Bellis (1995) suggested that the norm for ancestral males was to compete, so females must have been promiscuous and had various partners. Therefore, due to these findings it wasn?t frown upon for women to be promiscuous as it is nowadays. Lastly, we have to take into consideration the Sexual Strategies Theory which was proposed by Buss and Scmitt in 1993. They suggested that people will use long term and short term relationships whenever it suits them. This means that the range of possible reproductive behaviours is large and isn?t just limited as to how much parental investment individuals put in. Although it acknowledges that certain characteristic are desirable because they have evolutionary advantages, it also explains that we do have a choice in how we behave and what we choose to do, i.e. free will. To conclude, we can gather that the theory does explain differences in reproductive behaviour of genders rather well, as it offers a plausible explanation. However there are various criticisms of the theory. Nonetheless, it is a theory and not a hypothesis so there is enough evidence that supports the claims of the PIT. ...read more.