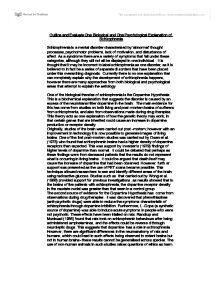 Outline and Evaluate One Biological and One Psychological Explanation of Schizophrenia

Outline and Evaluate One Biological and One Psychological Explanation of Schizophrenia Schizophrenia is a mental disorder characterised by 'abnormal' thought processes, psychomotor problems, lack of motivation, and disturbance of affect. As a syndrome there are a variety of symptoms that fall under these categories, although they will not all be displayed in one individual. It is thought that it may be incorrect to label schizophrenia as one disorder, as it is believed to in fact be a series of separate disorders that have been placed under this overarching diagnosis. Currently there is no one explanation that can completely explain why the development of schizophrenia happens, however there are many approaches from both biological and psychological areas that attempt to explain the aetiology. One of the biological theories of schizophrenia is the Dopamine Hypothesis. This is a biochemical explanation that suggests the disorder is caused by an excess of the neurotransmitter dopamine in the brain. The main evidence for this has come from studies on both living and post-mortem brains of sufferers from schizophrenia, and also from observations made during drug therapies. This theory acts as one explanation of how the genetic theory may work, in that certain genes that are inherited could cause an increase in dopamine production or receptor density. Originally, studies of the brain were carried out post-mortem; however with an improvement in technology it is now possible to generate images of living brains. ...read more.

It reduces the complex behaviours displayed in schizophrenia to simple biological terms, such as the imbalance of neurochemicals. Ideas represented through psychological theories are overlooked, although they too have supportive evidence. It is more likely that although dopamine levels may have some involvement in schizophrenia, this is not a complete explanation, and so will work in combination with other approaches. The approach is also determinist, as it suggests that positive environmental factors will have no protective effect over a person who is "due" to develop schizophrenia. In other words, no preventative measures could be taken against the disorder. This may have good ethical implications though, as it means that the parents are released from blame, whereas in other approaches they may seem to be held accountable for causing the disorder. The fact that it is neurochemical also suggests that drug therapy may be successful in alleviating some symptoms by reducing levels of dopamine, which would allow some patients to live more "normal" and independent lives. High levels of dopamine have been implicated in other disorders, such as Anorexia Nervosa; however these patients do not also exhibit schizophrenic symptoms, so it is unlikely that dopamine alone can cause this specific behavioural response. A psychological theory that attempts to explain the development of schizophrenia is the behavioural approach. ...read more.

Kagan (1982) suggested the temperament hypothesis, which says that it could be possible for a child to be born with an innate personality or temperamental characteristics, so that no matter how much reinforcement the parents provided the child was unable to respond in a normal way. Although both the dopamine hypothesis and behavioural approach have evidence supporting their roles in schizophrenia, it is unlikely that either would act as a causal factor alone. It is more probable that a number of different factors are involved in the development of schizophrenia, from both biological and psychological explanations. The way in which therapies have proved successful or theories proved fitting with some patients but not others further suggests that schizophrenia may in fact be a number of different disorders that have all been classed as one. This use of an overarching diagnosis may be hindering the progress in finding a cause or treatment for the disorders. Certain ethical issues may also arise in finding the causal factors, for example there may be guilt associated if parents are to be held accountable for bringing up children in a negative environment, or brain scans may become compulsory before job interviews or life insurance policies in order to eliminate those with the potential to develop schizophrenia. Overall, these approaches over-simplify a complex disorder and try to explain it through basic mechanisms and terms. In order to fully understand schizophrenia it ought to be considered holistically and approaches may need to be combined. ...read more.