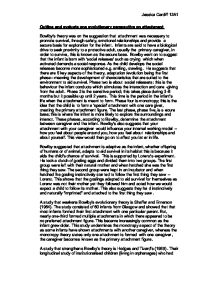 Bowlby’s theory was on the suggestion that attachment was necessary to promote survival, through safety, emotional relationships and provide a secure basis for exploration for the infant. Infants are said to have a biological drive to seek proximity to a protective adult, usually the primary caregiver, in order to survive, this is known as the secure base. Bowlby went on to suggest that the infant is born with ‘social releases’ such as crying which when activated demands a social response. As the child develops the social releases become more sophisticated e.g. smiling, crawling. He suggests that there are 5 key aspects of the theory, adaptation/evolution being the first phase– meaning the development of characteristics that are suited to the environment to aid survival. Phase two is about social releasers: this is the behaviour the infant conducts which stimulates the interaction and care-giving from the adult. Phase 3 is the sensitive period; this takes place during 3-6 months but it possible up until 2 years. This time is the period in the infant’s life when the attachment is meant to form. Phase four is monotropy; this is the idea that the child is to form a ‘special’ attachment with one caregiver, creating the primary attachment figure. The last phase, phase five, is secure base; this is where the infant is more likely to explore the surroundings and interact. These phases, according to Bowlby, determine the attachment between caregiver and the infant. Bowlby’s also suggests that your attachment with your caregiver would influence your internal working model – how you feel about people around you, how you feel about relationships and about yourself. This view would then go on to affect you later in life.

Bowlby suggested that attachment is adaptive as the infant, whether offspring of humans or of animal, adapts to aid survival in its habitat this is because it aids the child’s chance of survival. This is supported by Lorenz’s experiment. He took a clutch of gosling eggs and divided them into two groups. The first group were left with their natural mother and when hatched she was the first thing they saw. The second group were kept in an incubator and when hatched the gosling instinctively started to follow the first thing they saw – Lorenz. This shows that the goslings adapted to aid survival for themselves as Lorenz was not their mother yet they followed him and acted how we would expect a child to follow its mother. This also suggests they had instinctively and naturally “imprinted” and attached to the first thing they saw.

A study that weakens Bowlby’s evolutionary theory is Shaffer and Emerson (1964). The study consisted of 60 infants from Glasgow and showed that that most infants formed their first attachment with one particular parent. But, nearly one-third formed multiple attachments in which there appeared to be no preferred attachment figure. This became increasingly common as the infant grew older. This study undermines the monotropy aspect of the theory as some infants have shown attachments with another caregiver, whereas the monotropy theory states only one attachment is formed with one caregiver, the caregiver becomes known as the primary attachment figure.

A study that strengthens Bowlby’s theory is Hodges and Tizard’s (1989). Their longitudinal study of institutionalised children (living in orphanages) who had formed no attachment in the early parts of their lives had difficulty forming relationships with peers. Children adopted before 6 months years old did the best in forming attachments in this study – this provides evidence for the sensitive period as they were able to form attachments when Bowlby has suggested was the most sensitive time for this.

The problem was less severe if they had been adopted earlier in their lives. This strengthens the theory because it shows that the attachments were harder to form at a later stage in the infant’s life which the critical period supports.

A study that goes against Bowlby’s theory is the case of the twins. The Czech twins were ‘discovered’ at the age of 7. They had been locked up and isolated from the outside world and abused by their step-mother since birth. When discovered, they had no language ability at all. After loving care from two sisters, by the age of 14 the Czech twins showed normal social and intellectual functioning, and were able to form meaningful attachments. The evidence weakens Bowlby’s theory as it undermines the critical period. Although isolated since birth, once discovered the twins were both able to form ‘normal’ attachments. This suggests that the critical period doesn’t exist as at the age of 7+ they were able to attach whereas the critical period suggest this must occur during 0-2 years. However, it could be argued that the twins did form an attachment, not with a caregiver, but with one another. It may have not have been a typical attachment that we would expect to see, but an attachment could have been formed. The twins may have been unable to talk but they may have found ways to communicate and may have found comfort in one another, providing an emotional bond between one another, that being an attachment.

A study that provides evidence for the theory is Hazan and Shaver’s study. They found that adult’s romantic attachments were closely linked to their infant attachments. Securely attached infants tended to have secure romantic attachments. Insecurely attachment infants tended were more likely to be indifferent towards their romantic partners later in life, clingy, and/or jealous with them. This evidence agrees with Bowbly’s theory on the internal working model and continuity hypothesis. Bowlby suggests that your infant-caregiver will be similar to the attachment you have a romantic partner. This is because Bowlby stated that an infant’s internal working model would be reflective of their attachment with their caregiver and would contribute to their continuity hypothesis. This means that a negative attachment with the primary caregiver could lead to a negative internal working model and possible an apathetic continuity hypothesis creating a pessimistic outlook on those around them in society later in life.