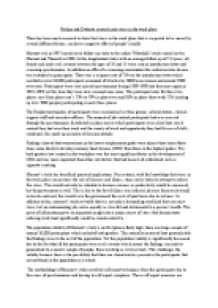 Outline and Evaluate Research into Stress in the Work Place

﻿Outline and Evaluate research into stress in the work place There has been much research to show that stress in the work place that is suspected to be caused by several different factors, can have a negative effect of people?s health. Marmot et al in 1997 carried out a follow up study to the earlier Whitehall I study carried out by Marmot and Theorell in 1988. In this longitudinal study with an average follow up of 5.3 years, all female and male civil servants between the ages of 35 and 55 were sent an introductory letter and screening questionnaire. In addition an offer of a screening examination for cardiovascular disease was extended to participants. There was a response rate of 73% to the introductory letter which resulted in over 10,000 participants examined of which over 3000 were women and around 7000 were men. Participants were sent a postal questionnaire during 1989-1990 and then once again in 1991-1993 yet this time they were also screened once more. The participant rates for these two phases rose from phase one?s 73% to 79% in phase two and 83% in phase three with 72% (making up over 7000 people) ...read more.

This is due to the fact if illness was reduced, absence from work would in turn be reduced; this would save the government the costs of paid leave due to sickness. In addition to this, marmot?s study revealed that it is not only a demanding workload that can cause stress, but an undemanding job can be equally as stressful and detrimental to a person?s health. This piece of information gives an important insight into a major source of stress that demonstrates reducing work load significantly could be counter-intuitive. The population validity of Marmot?s study is on first glance fairly high; there was huge sample of around 10,000 participants which included both genders. This naturally increased how generalisable the findings were to the rest of the population. Yet the population validity is significantly decreased due to the fact that all the participants were civil servants which means the findings can only be generalised to a narrow sample of people, those working as civil servants. This challenges the validity because there is the possibility that there are characteristics present in the participants that are not found in the population as a whole. ...read more.

The finishers also had higher levels of absenteeism and stress related illnesses like headaches. Johansson?s study has poor population validity due to a combination of factors. There was not only a very small sample size of 24 but all the participants were Swedish which means the research is ethnocentric. In addition to this the work environment in which the finisher?s worked was extremely specific and it is possible that this would not be found in other industries. These factors mean the findings have been based on a small number of people, from one country in the world that work in a very specialist industry; this considerably lowers the amount the research?s findings can be generalised to the population. Another weakness to the research is that individual differences are not controlled. This is because there is the possibility that people with certain personality traits are attracted to particular jobs and it is this that could cause their health problems as opposed to a lack of job control. It is important to take into account the idea of individual differences because it has been shown through research that has revealed that not all workers with low control and high demand jobs become ill. This indicates that responses vary from person to person. ...read more.