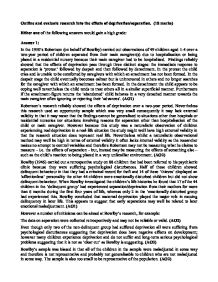 Outline and evaluate research into the effects of deprivation/separation.

Outline and evaluate research into the effects of deprivation/separation. (18 marks) Either one of the following answers would gain a high grade: Answer 1: In the 1950's Robertson (on behalf of Bowlby) carried out observations of 49 children aged 1-4 over a two-year period of children separated from their main caregiver(s) due to hospitalisation or being placed in a residential nursery because their main caregiver had to be hospitalised. Findings reliably showed that the effects of deprivation pass through three distinct stages: the immediate response to separation is 'protest' followed by despair and then followed by detachment. In the protest the child cries and is unable to be comforted by caregivers with which an attachment has not been formed. In the despair stage the child eventually becomes calmer but is uninterested in others and no longer searches for the caregiver with which an attachment has been formed. In the detachment the child appears to be coping well nevertheless the child tends to treat others all in a similar superficial manner. Furthermore if the attachment-figure returns the 'abandoned' child behaves in a very detached manner towards the main caregiver often ignoring or rejecting their 'advances'. (AO1) Robertson's research reliably showed the effects of deprivation over a two-year period. ...read more.

does have negative effects on development; however many children experience deprivation and do not suffer and long-term serious psychological problems suggesting that it is not as 'clear cut' as Bowlby is suggesting. (AO2) Bowlby's sample was biased in that all of the children in the sample were maladjusted in some way and therefore is not representative and probably not generalisable to children who are not maladjusted in some way. The sample is also too small to be representative of the population. (AO2) Bowlby makes the assumption that maternal deprivation was the major cause of maladjustment when it could have been due to many other factors, for example, being placed in strange and frightening environments, lack of attention from any potential caregiver, etc. (AO2) Bowlby's research may well have been biased as he was employed to do such research by the World Health Organisation for political purposes. That is Bowlby's work was used to support governments eager to encourage women to return to the home and leave the workplace after World War II. In reaction to this, feminists cited anthropological research from around the world to show that sole care by the mother was a recent Western invention. They also point out that in cultures where the mother was not the main caregiver or played little if any role in care-giving the children were not maladapted and grew up to be socialised, well-adjusted adults. ...read more.

Divorce involves more long-term deprivation than most incidences of hospitalisation and therefore may reveal much about the effects of long-term deprivation. Cockett & Tripp (1994) assessed 152 children whose parents had divorced or separated, some of whom had remarried and/or lived in a re-ordered family. Their research revealed that children from divorced or separated parents were more likely to have health problems, need extra help at school, suffer from low self-esteem and have friendship difficulties than a comparable control group of children. Furthermore it was found that these problems were much more apparent in re-ordered families. The researchers also found that the most affected children were those who had experienced multiple changes with the least affected being those who had experienced the same single parent. (AO1) This study used an opportunity sampling technique, which means that the findings may lack external validity because this technique never yields a representative sample. While this study shows the effects of deprivation it must be considered that there could be many causes for these behaviours other than deprivation that could account for the 'problems' experienced by children whose parents had divorced or separated because divorce involves much more emotional disruptions than simply deprivation of a previous caregiver. For example, the psychological adjustment of the custodial parent, the inter-parental conflict that the child witnesses, economic hardship - divorce and/or separation often means the 'family' have much less income than before the divorce/separation, stressful life-changes, etc. (AO2) ...read more.

This is a well balanced thoughtful essay. Remember to proofread at the end