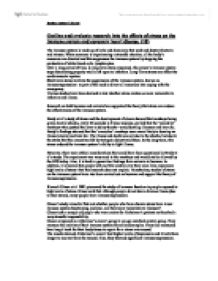 Outline and evaluate research into the effects of stress on the immune system and coronary heart disease.

Outline and evaluate research into the effects of stress on the immune system and coronary heart disease. (18) The immune system is made up of cells and chemicals that seek and destroy bacteria and viruses. When someone is experiencing a stressful situation, all the body's resources are diverted and this suppresses the immune system by stopping the production of white blood cells-lymphocytes. Over a long period of time, (a long-term stress response), the person's immune system stops functioning properly and is left open to infection. Long-Term stress can affect the cardiovascular system. Short-term stress involves the suppression of the immune system, known as immunosupresssion- as part of the need to divert all resources into coping with the emergency. Various studies have been devised to test whether stress makes us more vulnerable to infection and illness. Research on both humans and animals has supported the theory that stress can reduce the effectiveness of the immune system. Brady et al's study of stress and the development of ulcers showed that monkeys being given electric shocks, every 20 seconds in 6 hour sessions, proved that the 'executive' monkeys-who pushed the lever to delay shocks- would develop illnesses and later die. Brady's findings showed that the 'executive' monkeys were more likely to develop an illness (ulcers) ...read more.

This is positive as animal death is prevented. Glaser used interviews in his study. There are flaws to using this research method; people can lie, thus results are unreliable, they can withhold information or, conversely, exaggerate it for social desirability. By using interviews the cause and effect of the study cannot be established, it is simply a relationship between two variables. In addition, the immune system may have been affected by other factors in the carers' lives such as drugs, alcohol, caffeine, nicotine etc. A person's general health, their diet and physical activity, sleep patterns, age and medication could have all been factors supplementing their stress. The attempt to isolate these factors from the experiments would be controlled; however, it was unlikely that there was complete control over them. Despite this, the weight of the evidence does suggest that apart from short-term acute stress, the experience of stress does suppress the immune system. The relationship of the experiment shows that suppression of the immune system does make the body more vulnerable to illnesses. Long-term stress can affect the cardiovascular system. Studies have been carried out to test the effect of stress on the heart. Russerk's study, conducted in 1962, identified the link between stress and heart disease. He outlined two groups, which he thought would experience high levels and low levels of stress. ...read more.

Other studies have claimed that one area of Type A personality called cynical hostility is the part most likely to increase the likelihood of getting CHD. Also, this study only used middle-aged men, which are more likely to develop CHD than young men or women. However, because all the men were chosen from one place, confounding variables are reduced, such as culture. Linked with this is representation. The sample of men used was small, so it was not an accurate representation of the population. Other studies, which have replicated this one, have shown contradictory findings. Kiercolt et al provided one of the most reliable in proving the relationship between stress and illness. Other researchers have also reported similar findings for the recently bereave (Antoni 1987), and recently, Kiercolt's group have found reductions in immune functions in couples even after short episodes of marital conflict (Kiercolt Glaser et al 1998). They also found significant increases in release of stress hormones, and interestingly, changes in the stress indicators were greater and longer-lasting in women. Yet Brady's study was conducted before the BPS rules, his study still proved that the stress of maybe having the responsibility of delaying shocks stressed the monkeys and caused illnesses. If this research was to be correlated with humans, it still proves that stress causes illness. However, there is evidence, which hasn't been explained in Brady's study, such as; did the monkeys suffer psychological problems? ?? ?? ?? ?? Rozina Akhtar 12KAM ...read more.

The writer has included some key studies in the essay and has explained the link between stress and the body's immune system. To improve this work there needs to be clearer description of the experiments and their findings and a clearer description of what 'stress' is. The writer could also spend more time looking at long and short term stress. A well planned essay always helps so more work needs to be done on both the introduction and conclusion.