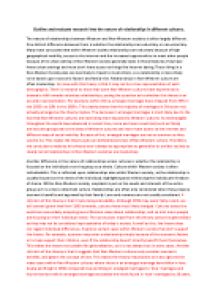 ﻿Outline and evaluate research into the nature of relationships in different cultures. The nature of relationships between Western and Non-Western societies is often largely different. One distinct difference between them is whether the relationships are voluntary or non-voluntary. Many have concluded that within Western society relationships are voluntary because of high geographical mobility, access to the internet and the increased opportunities to meet other people because of its urban setting. A Non-Western society generally lacks in these features; they have fewer urban settings and most don?t have access to things like internet dating. Those living in a Non-Western Society also are less likely to travel to meet others, so a relationship is more likely to be based upon economic factors and family ties. Relationships in Non-Western culture are often involuntary. An issue with this theory is that it may not be a true representation of each demographic. There is research to show that some Non-Western cultures have experienced a dramatic shift towards voluntary relationships, posing the question as to whether this theory is an accurate representation. ...read more.

Relationships are often only considered when they propose economic benefits and approval by their family. Love and romance are not usually considered. A criticism of this theory is that it lacks temporal validity. Although 1993 may seem fairly recent, we still cannot ignore that from 1993 onwards, cultures have most likely changed. Cultures across the world are now widely accepting more Western views about relationships, and so a lot more people are focusing on their individual needs. The conclusions made from this theory cannot be generalised as they may not be considered representative of today?s society. As well as this, the theory does not regard individual differences. It ignores certain cases within Western society that don?t support the theory. For example, a person may enter a relationship simply because of the economic factors or to help support their children, even if the relationship doesn?t directly benefit them themselves. This makes the theory not suitable for generalisation, as it is not always true in some cases. ...read more.

This recent change may mean that the differences between Western and Non-Western societies may not be down to the culture itself but due to the social mobility and urbanisation of the society. This makes conclusions taken from this theory hard to generalise, as it may not even be a correct representation of Western and Non-Western culture. You cannot define a culture by its level of urbanisation. There are many distinct differences between relationships in different cultures, as highlighted by various psychological studies and theories. The main similarity in these is that they usually result in relationships being categorised by being Western or Non-Western. Although these categories are commonly used to describe cultural relationships within psychology, a major issue with this is that it makes the study or theory reductionist. This is because it suggests that all relationships can be broken down into two simple components. Reducing relationships into these two simple categories poses the danger of many factors of relationships being disregarded. Individual differences of those involved will massively shape their behaviour within the relationship. ...read more.