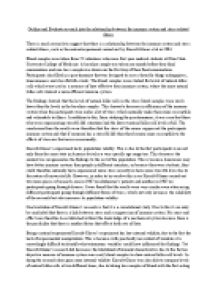 Outline and evaluate research into the relationship between the immune system and stress.

﻿Outline and Evaluate research into the relationship between the immune system and stress-related illness There is much research to suggest that there is a relationship between the immune system and stress related illness, such as the natural experiment carried out by Kiecolt-Glaser et al in 1984. Blood samples were taken from 75 volunteers who were first year medical students at Ohio State University College of Medicine. A baseline sample was taken one month before their final examinations and one tress sample was drawn on the first day of their final examinations. Participants also filled in a questionnaire that was designed to assess them for things unhappiness, lonesomeness and stressful life events. The blood samples were studied for levels of natural killer cells which were used as a measure of how effective their immune system, where the more natural killer cells showed a more efficient immune system. ...read more.

This decreases the amount we can generalise the findings to the rest of the population. This is because Americans may have better immune systems than people in different countries, or because they were students, they could therefore naturally have experienced more stress recently or have more stressful lives due to the nature of university life. However, in order to try resolve this issue Kiecolt-Glazer carried out two more pieces of research, one in 1987 on Alzheimer?s patients and another in 1987 on participants going through divorce. It was found that the results were very similar even when using different participants going through different forms of stress, which not only increases the reliability of the research but also increases its population validity. One limitation of Kiecolt-Glazer?s research is that it is a correlational study. ...read more.

This baseline took the individual differences of the participants? immune system into account, increasing the internal validity further. In addition to this, Kiecolt-Glaser used two well established scales of loneliness and stressful life events, namely The Social Readjustment Rating Scale and the ICLA Loneliness scale. This not only increases the credibility of the findings but also allowed each participant to be easily compared to one another. The reliability of the study increases due to the experiment by Cohen et al yielding similar results. Cohen et al asked participants to complete questionnaires assessing stressful life events, perceived stress and negative effects. Following this 394 healthy participants were then exposed intentionally to a common cold virus and were monitored whilst in quarantine for the development of clinical illness. The results were consistent with Kiecolt-Glazer as the higher scores on each of the 3 stress scales were associated with a greater risk of getting a cold. ...read more.