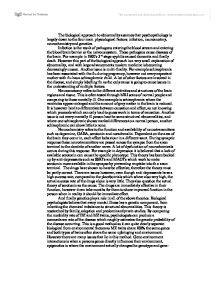 Outline and evaluate the biological approach to abnormality (12 marks)

The biological approach to abnormality assumes that psychopathology is largely down to the four main physiological factors: infection, neuroanotmy, neurochemistry and genetics. Infection is the result of pathogens entering the blood stream and entering the blood brain barrier or the nervous system. These pathogens cause diseases of the brain. For example in 1900's 3rd stage syphilis caused dementia and finally death. However this part of the biological approach is a very small explanation of abnormality, and with large advancements modern medicine is becoming decreasingly unseen. Another issue is multi-finality. For example schizophrenia has been associated with the flu during pregnancy, however not every expectant mother with flu has a schizophrenic child. A lot of other factors are involved in the disease, and simply labelling flu as the only cause is going to cause issues in the understanding of multiple factors. ...read more.

During synaptic response these neurotransmitters are passed across the synapse from the axon terminal to the dendrite of another nerve. A lot of dysfunction of neurochemicals occurs during this response. For example in depression it is believed that a lack of available serotonin can cause the specific phenotype. This theory has been backed up by anti-depressants such as SSRI's and MAOI's which work to make serotonin more available in the synapse by preventing reuptake into the axon terminal. The drugs have shown to have be effective, therefore the theory must be partly correct. There are issues however, even though anti-depressants have a high success rate, compared to the placebo trials which where also very high, the actual success rate of the drugs alone is very little. ...read more.

However there are many issues that lie in this method. Gene-environment interactions is when a persons genes directly influences their environment, epigenetics is where the environment actually changes the genotype and gene-environment correlations is where the genes are more likely to be found in certain environments. All of these issues cause problems in differentiating and separating what is genetics and what is environment. Sample sizes in these studies are often very small as twins with mental illness' willing to be studied can be hard to find, especially when reared apart. In conclusion there are four main basis of abnormality in the biological approach: infection, Neuroanatomy, neurochemistry and genetics. Due to the issues and uncertainty of these theories, I believe that until the neural code is better understood, looking at the biological model for answers is going to cause more problems than it is answers. ...read more.

Some evaluation of the biological model. Reference to research and further exploration of the strengths and weaknesses would improve this essay.