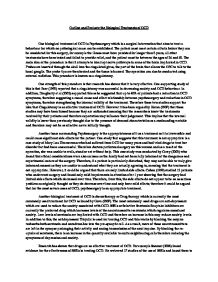 Outline and Evaluate the Biological Treatments of OCD

Outline and Evaluate the Biological Treatments of OCD One biological treatment of OCD is Psychosurgery which is a surgical intervention that aims to treat a behaviour for which no pathological cause can be established. The patient must meet certain criteria before they can be considered for this surgery, for example the illness must have persisted for longer than 5 years, all other treatments have been tested and failed to provide relief, and the patient must be between the ages of 26 and 65. The main idea of the procedure is that it attempts to interrupt nerve pathways in areas of the brain implicated in OCD. Probes are inserted through the skull into the cingulated girus, the part of the brain that allows the OFC to talk to the basal ganglia. The probe tips are then heated and the tissue is burned. The operation can also be conducted using external radiation. This procedure is known as a cingulotomy. One strength of this procedure is that research has shown that it is very effective. One supporting study of this is that Baer (1995) reported that a cingulotomy was successful in decreasing anxiety and OCD behaviour. In addition, Dougherty et al (2002) supported this as he suggested that up to 45% of patients had a reduction in OCD symptoms, therefore suggesting a casual cause and effect relationship between psychosurgery and reduction in OCD symptoms, therefore strengthening the internal validity of the treatment. ...read more.

The most commonly used drugs are anti-depressant which are used to reduce the anxiety associated with OCD. SSRIs or Selective Serotonin Reuptake Inhibitors are currently the preferred drug which increases levels of the neurotransmitter serotonin which regulates mood and anxiety. Low levels of serotonin are implicated with OCD and therefore an increase in this may reduce anxiety levels. In addition to this, the antidepressant Tricyclic is used for treating OCD and this works by blocking the enzyme reabsorbs both serotonin and noradrenaline into the pre-synaptic cell. As a result, more of these neurotransmitters are left in the synapse prolonging their activity and easing transmission of the next impulse. By blocking the re-uptake of serotonin, there is an increase in the quantity available to excite neighbouring cells therefore reducing the symptoms of depression and anxiety. Research has shown that drugs are an effective treatment of OCD. For example Soomor (2008) found evidence for the effectiveness of SSRIs in treating OCD. He reviewed 17 studies of the use of SSRIs and found them to be more effective than placebos in reducing the symptoms of OCD as measured by YBOCS. In addition to this Koran (2007) found that Tricyclics are more effective in treating OCD than SSRIs. However, Szechtman (1998) did find that SSRIs were still effective and he suggested that around 50 - 70% of patients reported reduction in symptoms after using SSRIs. ...read more.

Also, it has been argued that all the treatments sit on the reductionist side of the reductionism against holism debate. Reductionism is when behaviour is reduced down to solely one cause, not looking at how other variables may interact. For example, when using drug treatments, the patients simply take the drugs to reduce OCD symptoms and are not made to look at other aspects of their live that could be influencing their OCD. In addition to this, when undergoing psychosurgery, it is simply a biological procedure and therefore takes away any cognitive element that may be involved in causing the OCD symptoms. This is a weakness because by only looking at one factor, we do not gain a valid, in depth understanding of all possible causes meaning any treatment developed will only treat part of the problem. However, this could also be seen as a strength as by focusing on one factor alone, you can isolate cause and effect and therefore fully understand the role that the one factor in this case biological treatments plays in reducing OCD symptoms. To conclude it is clear that both treatments discussed clearly have many positive effects and are indeed successful in reducing OCD symptoms, however many argue that these treatments are not appropriate as they have too many negative side effects such as memory loss and also may not actually be treating the cause of the OCD just the symptoms. Therefore psychologists now need to conduct more research to find drugs and surgeries that have reduced side effects and abide by ethical guidelines. ...read more.

The writer should have defined OCD in the introduction and then gone on to describe in more detail how OCD can affect behaviour. The writer should also make it clear that it is an anxiety disorder. Then the main biological considerations could have been described e.g. brain activity, neurotransmitters and genetics. The treatments for this could then have followed on. Finally, a conclusion could have been reached using all the studies which have been carried out past and present. Although the writer has discussed psychosurgery and drug treatments, genetics have not been mentioned. With better planning, a good introduction and conclusion, the writer could improve upon this score.