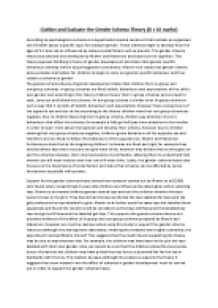 Transfer-Encoding: chunked ﻿Outline and Evaluate the Gender Schema Theory (8 + 16 marks) According to psychologists a schema is a hypothetical mental construct that contains an organised set of beliefs about a specific topic for example gender. These schemas begin to develop from the ages of 2-3 and can be influenced by various social factors such as parents. The gender schema theory was devised and developed by Martin and Halverson and based on the cognition. This theory opposes Kohlberg?s theory of gender development and states that gender specific behaviours develop before acquiring gender consistency. Martin et al states that gender identity alone provides motivation for children to begin to carry out gender specific behaviour and thus creates a schema on gender. ...read more.

however due to children viewing their out-group schema as negative, children ignore behaviours of the opposite sex and therefore are less likely to follow the behaviours of the opposite sex. Martin and Halverson furthermore state that at the beginning children?s schemas are fixed and rigid, for example they strictly believe boys were trousers and girls wear skirts, however they believe that as time goes on and the schemas develop, their schemas become more flexible, allowing them to understand that woman can still wear trousers and men can still wear skirts. Lastly, the gender schema theory also focuses on the importance of social factors and states that schemas can be affected by social interactions especially with parents. ...read more.

However we must be cautious when using this study to support the gender schema theory as although the settings were laboratory, meaning the variables were highly controlled, the experiment involved Martin himself. This suggests that the results found supporting the theory may be due to experimenter bias. For example, the children may have been led to pick the toys labelled with their own gender. Also, we cannot be sure that the children picked the toys purely due to the label as the children may have picked the toys due to a personal like for the toy or familiarity with the toy. This matters because although the evidence supports the theory it suggests that more research into the effect of schemas in gender development must be carried out in order to support the gender schema theory. ...read more.