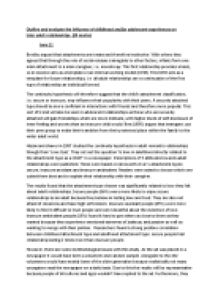 Outline and evaluate the influence of childhood and/or adolescent experiences on later adult relationships. (24 marks)

﻿Outline and evaluate the influence of childhood and/or adolescent experiences on later adult relationships. (24 marks) June 11 Bowlby argued that attachments are innate and therefore instinctive. With others they agreed that through the role of social releasers alongside to other factors, infants form one main attachment to a main caregiver, i.e. monotropy. This first relationship provides a basis, so in essence acts as a template or an internal working model (IWM). This IWM acts as a template for future relationships, i.e. all adult relationships are a continuation of the first type of relationship an individual formed. The continuity hypothesis will therefore suggest that the child?s attachment classification, i.e. secure or insecure, may influence their popularity with their peers. A securely attached type should be more confident in interactions with friends and therefore more popular. This sort of trend will also be seen in adolescent relationships as those who are securely attached will gain friendships which are more intimate, with higher levels of self-disclosure of inner feeling and secrets than an insecure child would. Bee (1995) argues that teenagers use their peer group to make their transition from their protected place within the family to the wider adult world. ...read more.

Also, retrospective accounts rely on memory. Such recollections are likely to be flawed and the data obtained will be biased. Lastly, looking at ethical issues, the participants wouldn?t have been fully debriefed as they didn?t know the true nature of the study and they were self selected from newspaper readers. Therefore, the participants were not protected from psychological harm. The results of this study were supported by a number of other studies such as by Feeny and Noller (1990) where they found that securely attached individuals had the most long term enduring romantic relationships. Aviodanlty attached people had short lived and least intense relationships. There are other possible alternative explanations for the continuity between childhood attachment and later attachments. Some researchers have suggested that children may learn relationship skills from their parents, i.e. Social Learning Theory (SLT). Children will observe their parent?s behaviour and will then imitate it. If the father cheats on the mother and causes a divorce then the mother will be hurt, the child will see her through this pain, causing her not to trust men in relationships. This in turn means that their relationships will be shorter and therefore will become insecurely attached in their adult attachment type whereas with their main caregiver they will be securely attached. ...read more.

Lastly we need to take into consideration Freud?s Psychodynamic Approach. The model is based on his division of personality from the psyche: id, ego, and superego. He believed that problems arose directly from the dynamics of the personality. Inconsistencies of attachment types originate from conflict in childhood, due to the ego not being developed enough to deal with the id and superego. Therefore any traumatic event will be repressed into the unconscious part of the mind. However the anxiety surrounding these events doesn?t disappear, they will express themselves later on in life. This approach could explain why some people are securely attached to their main caregiver but then will be inseculry attached when it comes to relationships. If a child at a young age is sexually abused by a person in their life, they will repress the event as it is too hard to deal this. However, once an adult and having romantic relationships, these feelings will remerge which is why they will become insecurely attached. They won?t be able to trust their partner or believe that true love exists and their relationships will be shorter than those of securely attached people. Due to all these limitations and contradictory evidence, we can?t form a theory. There are too many ways to explain attachment types. ...read more.