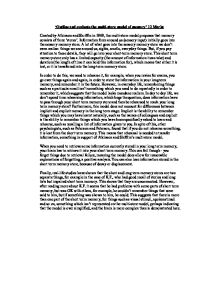 'Outline and evaluate the multi-store model of memory' 12 Marks Created by Atkinson and Shriffin in 1968, the multi-store model proposes that memory consists of three 'stores'. Information from around us (sensory input) initially goes into the sensory memory store. A lot of what goes into the sensory memory store we don't even realise: things we see around us, sights, smells, everyday things. But, if you pay attention to these details, they will go into your short-term memory store. This short term memory store only has a limited capacity (the amount of information it can take) and duration (the length of time it can hold this information for), which means that either it is lost, or it is transferred into the long-term memory store. ...read more.

In day to day life, we don't spend time rehearsing information, which begs the question; does information have to pass through your short term memory store and then be rehearsed to reach your long term memory store? Furthermore, this model does not account for differences between implicit and explicit memory in the long term stage. Implicit is the ability to remember things which you may have learnt naturally, such as the names of colleagues and explicit is the ability to remember things which you have been specifically asked to learn and rehearse, such as recalling a list of information given to you. In spite of this, other psychologists, such as Peterson and Peterson, found that if you do not rehearse something, it is lost from the short term memory. ...read more.

Finally, real-life studies have shown that the short and long term memory stores are two separate things, for example in the case of K.F., who had good recall of stories and long lists but impaired short term memory. This shows that they are unconnected. However, after reading more about K.F. it seems that he had problems with some parts of short term memory, but was OK with others, for example, he couldn't remember things that were said to him, but if something was shown to him, he could. This suggests that there is more than one part of the short term memory, for things such as visual stimuli, spoken stimuli and so on, something which isn't represented on the multi-store model, perhaps indicating that the model is over simplified, and the brain is more complex than is demonstrated here. ...read more.

Reasonable structure and clear communication. Some use of psychological terms, range of issues reasonable with some depth, reasonable expression of ideas, spelling punctuation and grammar. Weakness mainly could be more relevant research and discussion of their implications for the model.
3 stars/4 stars

The student provides a nicely concise, yet accurate and detailed, outline and evaluation of the Multi-Store Model of memory, describing succinctly the background information and theory of the model, followed up with some evaluation points relating to empirical research. Although ...

The student provides a nicely concise, yet accurate and detailed, outline and evaluation of the Multi-Store Model of memory, describing succinctly the background information and theory of the model, followed up with some evaluation points relating to empirical research. Although this question will typically be shorter than a standard essay as it is only a 12 mark question, I believe the student should still provide a more explicit introduction and conclusion Ã¢â‚¬â€œ currently the beginning and end paragraphs are more indicative of main-argument paragraphs as they include detailed information and discussion points (e.g. Ã¢â‚¬Å“in the case of K.F., who had good recall of stories and long lists but impaired short term memoryÃ¢â‚¬Â¦Ã¢â‚¬Â). I would suggest a couple of sentences for the introduction, setting the scene as they began (with the authors and dates of the model) and then what will be discussed (e.g. there is empirical research to both support and the modelÃ¢â‚¬Â¦); as well as a couple of concluding sentences to summarise their findings and provide an overarching judgement on the discussion. This is important as it portrays to the reader the studentÃ¢â‚¬â„¢s ability to make opinionated and rational judgements on a topic and proves their understanding of the area.

The student demonstrates a good level of critical analysis, looking at both the weaknesses of the model (e.g. Ã¢â‚¬Å“However, in everyday life, remembering things such as a particular smell isnÃ¢â‚¬â„¢t something which you need to do repeatedly in order to remember it, which suggests that the model lacks mundane realism.Ã¢â‚¬Â) as well as its strengths (e.g. you forget things due to retrieval failure, meaning the model does allow for reasonable explanations of forgetting, a positive analysis). It is important to remember that critical analysis does not mean you should only point out limitations of research or models, if there is supporting research this also counts as providing high levels of analysis. It is also nice to see the inclusion of research to back up the points argued (e.g. Peterson and Peterson, K.F. case study). In order to get higher marks, however, it would be nice to see a little more detail of what these entailed so it is clear to the reader why they are relevant, and also proves the student has done further reading.

Spelling, grammar, and punctuation are of a consistently high manner throughout. And generally, the structure is good Ã¢â‚¬â€œ although as discussed a defining introduction and conclusion would be useful Ã¢â‚¬â€œ but this can be difficult with the time constraints of a 12 mark question. Psychology terminology is correctly used throughout (e.g. sensory input, mundane realism, explicit and implicit, etc) Ã¢â‚¬â€œ however, at some points these deserve more explanation, particularly the sentence Ã¢â‚¬Å“You can also lose information stored in the short term memory store, because of decay or displacement.Ã¢â‚¬Â Ã¢â‚¬â€œ do not assume the reader will understand what these are, a short but clear explanation should be provided.