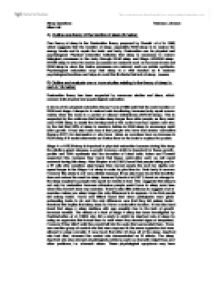 Outline one theory of the function of sleep

A) Outline one theory of the function of sleep (6 marks) One theory of sleep is the Restoration theory proposed by Oswald et al in 1966, which suggests that the function of sleep, especially REM sleep is to restore the energy levels and to repair the brain and body. Restoration can be physical and psychological. Physical restoration indicates that sleep is necessary to restore biological processes in the body through REM sleep and Stage 4/NREM sleep. NREM sleep is when the body's processes are restored such as hormone levels and REM sleep is when the brains processes are restored, such as protein synthesis. Psychological restoration says that sleep is a vital function as it restores psychological functions and helps to avoid the ill effects that lack of sleep causes. B) Outline and evaluate one or more studies relating to the theory of sleep in part A (18 marks) Restoration theory has been supported by numerous studies and ideas, which concern both physical and psychological restoration. In terms of the physical restoration theory Horne (1988) said that the main function of REM and stage 4 sleeps is to restore brain functioning, because body repair occurs mainly when the body is a period of relaxed wakefulness (NREM sleep). ...read more.

The sleep deprived rats also showed physiological problems such as dramatic weight loss and other problems, i.e. stomach ulcers. These physiological symptoms may have occurred due to the stress brought about from the lack of sleep gained, but this is not certain and could be due to other factors. Also it is difficult to generalise the findings to humans, as they may not produce the same results when deprived of sleep. Jouvet (1967) used cats and the 'flowerpot technique' to show the importance of REM sleep. A cat was put on top of a flowerpot, which was surrounded by water. Whenever the cat slipped into REM sleep the loss of muscle tone caused the flowerpot to tip over so the cat fell into the water and woke up. The cats deprived of REM sleep died eventually, which indicates a lack of REM sleep can cause ill effects. These findings cannot be generalised to humans because they may not produce the same psychological problems as the cats in the experiment. However similar experiments cannot be conducted on humans because it would be considered more unethical than using the cats; therefore humans have only taken part in studies of partial sleep deprivation, which ...read more.

He also displayed some physiological effects, such as slowing of the EEG and a decline in body temperature. These studies show that lack of sleep can cause ill effects on psychological functions and therefore are reliable in explaining that sleep is vital for restoring the mind to avoid these. However these studies can be criticised for lacking reliability, because they were only case studies and so there will have been a certain lack of control. There also may have been demand characteristics in the Randy Gardner study, which meant that Randy Gardner may have known that the experimenter was expecting a particular outcome; therefore this may have influenced his behaviour. In conclusion it can be seen that physical and psychological restoration are important theories of sleep, because they state that if we are deprived of sleep we are more likely to suffer from mind and body ill effects. These ideas have being mainly supported by sleep deprivation studies on animals and humans. However these studies are not completely reliable as they have been criticised for lacking reliability. Therefore more studies will have to be done in order to provide reliable evidence to suggest that restoration is a good explanation of why we need to sleep. ?? ?? ?? ?? Sleep Questions Rebecca Johnson Miss Hall ...read more.

The writer has made a very good and detailed account of the restoration theory of sleep. There are many and varied studies cited and most of them have been referenced. The work appears to be written in the writer's own words and shows a good understanding of the topic. With a few adjustments this essay could receive full marks.