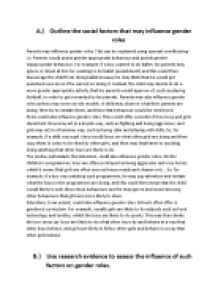 Outline the social factors that may influence gender roles

﻿1. Outline the social factors that may influence gender roles Parents may influence gender roles. This can be explained using operant conditioning- i.e. Parents would praise gender appropriate behaviour and punish gender inappropriate behaviour. For example, if a boy wanted to do ballet, his parents may ignore or shout at him for wanting to do ballet (punishment) and this could then discourage the child from doing ballet because he may think that he would get punished even more if he carried on doing it. Instead, the child may decide to do a more gender appropriate activity that his parents would approve of, such as playing football, in order to get rewarded by his parents. Parents may also influence gender roles as they may serve as role models. A child may observe what their parents are doing, then try to imitate them, and then that behaviour would be reinforced. Peers could also influence gender roles. They could offer a model of how boys and girls should act. Boys may act in a boyish way, such as fighting and being aggressive, and girls may act in a feminine way, such as being calm and playing with dolls. ...read more.

They compared 27 egalitarian families with 42 traditional families and found out that children in traditional families tended to use gender labelling earlier than those children in egalitarian families and they showed more gender stereotyping at the age of 4. It supports the view that parents are important role models. The fact that those children raised in a traditional family showed more gender stereotyping when they were only 4 just goes to show that parents can be very influential as to their child?s gender role because the their children may have copied their behaviour and then reinforced it as they may have thought that it was the way they should act. However, having said that, it could be argued that not all children view their parents as role models, so they are less likely to be influenced by them. They may not seek guidance from their parents and instead, they may seek guidance from their peers and other people, so their parents may not be as important when it comes to their gender role. The idea that peers could influence gender roles can be explained by Langlois and Downs? study that was done in 1980. ...read more.

There may be other factors that influence a child?s gender role development such as peers and education, so the media may not be as important when it comes to a child?s gender role development. Education is likely to influence gender roles. Connell (1995) states that boys are slower to read than girls, more likely to drop out of education, be excluded and disciplined and taught in Special Needs programmes. This may be due to school factors that may influence their gender role behaviour. For example, because the school offers a gendered curriculum, this may cause problems to the children if, for instance, a girl decided to do a boyish subject. This may cause problems because the boys may feel that they are becoming feminine if they notice more girls also doing their subject. This may then lead them to dropping out of education or being excluded. However, not all children are bothered about the education, so it cannot be assumed that all children?s gender roles will be influenced by education- some children may not even care about whether girls do the same subjects as them or not, so it could be argue that education may not always be important when it comes to a child gender role development. The children who are not influenced by education may develop gender roles from their parents or peers or the media. ...read more.