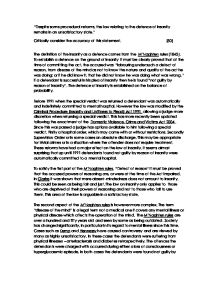 "Despite some procedural reforms, the law relating to the defence of insanity remains in an unsatisfactory state." Critically consider the accuracy of this statement. [50] The definition of the insanity as a defence comes from the M'Naghten rules (1843). To establish a defence on the ground of insanity it must be clearly proved that at the time of committing the act, the accused was "labouring under such a defect of reason, from disease of the mind as not to know the nature and quality of the act he was doing; or if he did know it, that he did not know he was doing what was wrong." If a defendant is successful in his plea of insanity then he is found "not guilty by reason of insanity". The defence of insanity is established on the balance of probability. Before 1991 when the special verdict was returned a defendant was automatically and indefinitely committed to mental hospital. ...read more.

The M'Naghten rules are over a hundred and fifty years old and seen by some as being outdated. Society has changed significantly, in particular in its regard to mental illness since this time. Cases such as Kemp and Hennessy have caused controversy and are viewed by many as highly unsatisfactory. In these cases the defendants were suffering from physical illnesses - arteriosclerosis and diabetes retrospectively. The offences the defendants were charged with occurred during either a loss of consciousness or hyperglycaemic episode. In both cases the defendants were found not guilty by reason of insanity. The term "Insane" has a great amount of stigma attached to it. Many would argue that it is unsatisfactory for the law to label defendants with physical disabilities or conditions as being insane. Perhaps a defence of automatism would be more appropriate in such situations. This was argued by Kemp but was rejected in favour of insanity. ...read more.

This can amount to insanity as in the case of Burgess, yet in the case of Bratty a definition was given of automatism and was taken to include sleepwalking. There are however many satisfactory areas of the law on insanity. It is a very workable defence; it is fair for example in that it requires evidence from at least two medical experts. Although he criticised the defence in terms of the M'Naghten rules being outdated, Morris also commented that, "as a means whereby juries work rough justice in a difficult peripheral area of law and morality they are reasonably satisfactory. In conclusion the statement describing the law on insanity as being in an unsatisfactory state could be argued. Although the area needs small reforms, in particular regarding the definition of "disease of the mind" in reference to physical illness, the majority of the law on the defence is in a satisfactory state. The 1991 reforms following the Criminal Procedure (Insanity and Unfitness to Plead) Act 1991 have corrected the error of hospitalising defendants who do not require psychiatric treatment and would never be medically classed as insane. ...read more.