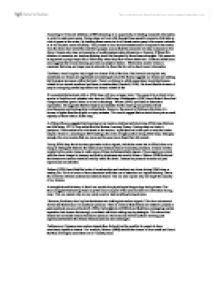 According to Crick and Mitchison (1983) dreaming is an opportunity of deleting unwanted information in order to make more space. During sleep our brain sifts through these parasitic memories that take up a lot of space in the cortex. By deleting these memories it will create more space in the neuron network so it will function more efficiently. This process is done by the bombardment of impulses to the cortex from the brain stem whilst the modified synapses ensures that the memories will stay unlearned in the future. Dreams also clear out memories of a pathological nature (obsessive or bizarre). Without this deletion of memories our daytime thinking would be disrupted by these bizarre thoughts. This seems to be apparent in people deprived of REM sleep when they show bizarre behaviour. Crick and Mitchinson also suggests that reverse learning provides an adaptive feature.  REM allows smaller brains in mammals that sleep and larger neural networks for those that do not to absorb more information.

The theory would explain why forget our dreams 95% of the time. But it would not explain why sometimes our dreams are significant and meaningful since this theory suggests our dreams are nothing but biological processes within the brain. There is evidence in which researchers found that dreams related to our current emotional problems in awake-state (Domhoff, 1996). He found that the dreams of people undergoing marital separation had dreams related to the

It is expected that animals with no REM sleep will have a larger brain. This seems to be evident in two species of dolphins and anteaters who have no REM sleep. Mukhametov (1987) found that all three had a large neocortex (part of brain involved in thinking).  Winson (1997) provided an alternative explanation. He suggested that the dolphin and anteater did the clearing out operation whilst simultaneously performing daily routines/tasks. However, the amount of folding in the brain of a human is higher than the dolphin or spiny anteater. This would suggest that we could store just as much capacity of those with no REM sleep.

A different theory suggests that dreaming is just random electrical activity during REM sleep (Hobson and McCarley, 1977). They called this the Reverse Learning Theory. During sleep our body is paralysed. There seems to be a blockade in the sensory  inputs (but not in the eyes or ears) and motor outputs. However, according to EEG readings, the cortex is highly active during REM sleep. Strangely enough, the only muscles that can move are the eyes, hence Rapid Eye Movement.

During REM sleep the brain stem generates random signals, which the cortex has a difficult time over trying to distinguish between the external and internal stimuli it normally processes. Dreams are then created by the cortex trying to make sense of these indistinguishable signals. These signals are mixed with the stored images in memory and that is whydreams are usually bizarre. Hobson (1988) believed that dreams are random electrical activity within the brain. Dreams are personal because our past experiences are activated.

Hobson (1994) found that the levels of noradrenaline and serotonin are lower during REM sleep or waking life. The low levels of these chemicals inhibit the use of attention and logical thinking. Hence the confusion between external and internal stimuli. This can also explain why we forget the majority of our dreams.

A strength about this theory is that it can explain the physiological happenings during dream. The theory suggests that during dream only the sensory inputs of the eyes and ears are not blocked during sleep. This can explain why we can rarely smell or taste anything during dreams.

However, the theory also implies that dreams are nothing but random signals. This does not account for the fact that dreams are sometimes personal. There is evidence that dreams are related to present or past emotional concerns (Domhoff, 1996). Cartwright et al (1984) found that those undergoing marital separation had dreams that strongly correlated with their waking-coping strategies. This shows that dreams are not infact random but can be personal. But it can also be the synthesis drawing past experiences therefore the dreams become personal and meaningful.

Furthermore, if dreams were random signals then it should not be possible for people to have consistent, repetitive dreams.  For example, Hobson (1988) studied the dreams of one month and found that they will highly consistent over a 3 month period.

This candidate's knowledge is very good, but they have not formed an answer that suitably answers the question. The response is therefore limited in marks as it does not satisfy the demands of the question. The question asks for an ...

This candidate's knowledge is very good, but they have not formed an answer that suitably answers the question. The response is therefore limited in marks as it does not satisfy the demands of the question. The question asks for an "Outline" of two theories; the candidate appears to get off to a good start with an excellent outline of Crick & Mitchinson's theory of the biology of dreaming, but instead of critically evaluating the theory and then beginning on the compulsory second, the candidate simply outlines - in arguably less detail - a lot of other theories of the biology of dreaming, with only a few speckles of evaluation interspersed throughout, none of which is to an acceptable depth or discussion because the candidate does not provide a balanced argument that effectively evaluates two of the theories. The candidate's knowledge is fine, but they have not answered the question here; I stress the importance of paying attention to the question and making sure all answers pertain explicitly to the question.

The Level of Analysis here isn't very evident. Though the questions asks for "Outline" and "Evaluate", candidates cannot expect to achieve a high grade for concerning only one of the question targets. It is likely that the "Outline" section will be worth 6-8 marks and the "Evaluate" being worth 10-12 marks, so to neglect the large portion of the question marks is not a wise idea. The candidate should therefore aim to, after the "Outline" section, construct an argument consisting of two strengths and two weaknesses for each. Each of these strengths and weaknesses must be contextualised, and to achieve the highest grades candidates must be looking to integrate other arguments and debates in Psychology into the evaluation, e.g. - An outline of Dement & Kleitman's study into the stages of sleep and dreaming could be evaluated as having high control and objectivity due to the collection of quantitative data, and this could be linked to the Scientific debate in Psychology. The weaknesses include the lack of ecological validity (due to high control) and the potential reductionism of the quantitative data collected. Without this analysis, this candidate is limited to a potential score of (if the question is out of 18) 6 (for "Outline") + 2 (for "Evaluate"), or a total of 8/18.

The Quality of Written Communication is fine here. The candidate utilises a number of psychology-exclusive terminology and applies them appropriately and proficiently. The spelling, grammar and punctuation is very adept and accurate throughout. I can only commend the candidate for their clarity of written expression here as there answer is very clear and precise read due to this written accuracy.