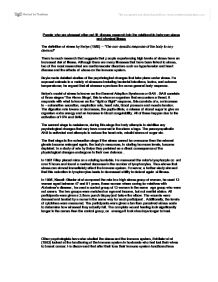 People who are stressed often get ill; discuss research into the relationship between stress and physical illness.

People who are stressed often get ill; discuss research into the relationship between stress and physical illness The definition of stress by Selye (1950) - "The non-specific response of the body to any demand" There is much research that suggests that people experiencing high levels of stress have an increased risk of illness. Although there are many illnesses that have been linked to stress, two of the most researched are cardiovascular disorders such as hypertension and heart disease and the effects of stress on the immune system. Seyle made detailed studies of the psychological changes that take place under stress. He exposed animals to a variety of stressors including bacterial infections, toxins, and extreme temperatures; he argued that all stressors produce the same general body response. ...read more.

The parasympathetic ANS is activated and attempts to reduce the heart rate, rebuild stores of sugar etc. The final stage is the exhaustion stage if the stress cannot be overcome then the adrenal glands become enlarged again, the body's resources, including hormone levels, become depleted. In a study of rats by Selye they perished as a direct consequence of the physiological changes undergone in their own defence. In 1981 Riley placed mice on a rotating turntable. He measured the mice's lymphocyte count over 5 hours and found a marked decrease in the number of lymphocytes. Thus shows that stress can almost immediately affect the immune system. However, a further study showed that this reduction in lymphocytes leads to decreased ability to defend against illness. ...read more.

Other psychologists have also studied the stress and the immune system, Schliefer et al (1983) looked at the functioning of the immune system in husbands who had lost their wives to breast cancer. He discovered that after their loss their immune system functioned less effectively. In 1993, Cohen et al studied how stress affected the likelihood of catching infectious diseases. Participants were 154 men and 266 women. The level of stress in their lives was measured using a psychological stress index (PSI). He then exposed volunteers to nasal drops containing respiratory diseases and used blood measures and clinical observation over the next six days to see if a cold would develop. They found that participants with a lower score on the PSI suffered less from a cold than those who scored higher. ...read more.