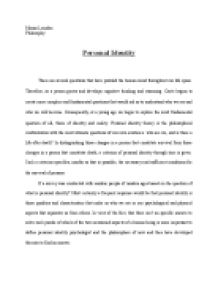 ﻿Marisa Lourdez Philosophy Personal Identity There are several questions that have puzzled the human mind throughout our life spam. Therefore, as a person grows and develops cognitive thinking and reasoning. One's begins to create more complex and fundamental questions that would aid us to understand who we are and who we will become. Consequently, at a young age we begin to explore the most fundamental question of all, those of identity and reality. Personal identity theory is the philosophical confrontation with the most ultimate questions of our own existence: who are we, and is there a life after death? In distinguishing those changes in a person that constitute survival from those changes in a person that constitute death, a criterion of personal identity through time is given. Such a criterion specifies, insofar as that is possible, the necessary and sufficient conditions for the survival of persons. If a survey was conducted with random people of random ages based on the question of what is personal identity? Most certainty a frequent response would be that personal identity is those qualities and characteristics that make us who we are or our psychological and physical aspects that separates us from others. ...read more.

John Locke, for example, holds that personal identity is a matter of psychological continuity. According to this view, in order for a person X to survive a particular adventure, it is necessary and sufficient that there exists, at a time after the adventure, a person Y who psychologically evolved out of X. This idea is typically cashed out in terms of overlapping chains of direct psychological connections, as those causal and cognitive connections between beliefs, desires, intentions, experiential memories, character traits, and so forth. This Lockean view is well suited for thought experiments conducted from first-person points of view, such as body swaps or tele-transportation, but it, too, faces obstacles. For example, on this view, it appears to be possible for two future persons to be psychologically continuous with a presently existing person. Can one really become two? In response to this problem, some commentators have suggested that, although our beliefs, memories, and intentions are of utmost importance to us, they are not necessary for our identity, our persistence through time. At the same time, according to Locke the criteria for identity is memory, if we remember to have done or experience something then we are the ones who have done such action and that is what makes us unique to be considered a person. ...read more.

Based on the Psychological Approach the other human being, who now has your mental features, would consider to also being you because of the psychological continuity. In this case identity is a one-one relation, meaning only identical to one thing and one thing only although not the same can be said in branching cases. Surprisingly, non-branching will mean then that if your brain is divided, you have a chance of surviving if only one half is preserved but you will die if both halves are destroyed. Personally, I considered that the argument of what is personal identity is very similar to the argument of Nature vs. Nurture in Psychology. One can go either way depending on believes considerations or understanding on the topic, however, there is always the possibility that in reality it is a combination of both approaches. The same can be assumed for personal identity, though personally I see several advantages in supporting continuity as the criteria for personal identity. First, it fully captures the conception we have of ourselves as self-making agents. Second, while not reducing us to mere bodies, it yet avoids forcing us to take sides between the physical and psychological continuity approaches. Third, it incorporates psychological continuity into a more holistic and intelligible picture of personhood. ...read more.