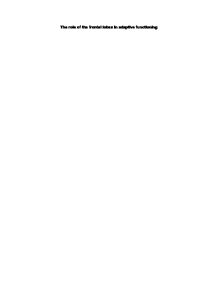 5.1 The Frontal Lobes and Personality This writer is amenable to the theory presented by Stuss, Gow and Heatherington (1992) who note the heterogeneous nature of symptoms with frontal lobe dysfunction as well as their clearly paradoxical extremes in these symptoms. They conclude that the frontal lobe is responsible for personality, which includes mood, affect and drive. They maintain that these four constructs present a comprehensive explanation of frontal lobe functionality and dysfunction. Mood is defined as the subjective internal experience, which is usually a constant internal disposition, but may change. Affect is defined as the externalised expression of mood. Drive is defined as a force which motivates human behaviour, this is not the psychodynamic term, but is better seen as "autoactivation" (Stuss & Gow., 1992, p. 350). Emotion is a term that is all inclusive of mood, affect and drive and is more cognitively orientated the experience or conscious awareness of internal feelings. Stuss & Gow (1992) define personality as the combination of qualities or characteristics that make a person unique. They note that these characteristics are stable and result in predictable behavioural responses to the external environment. Personality is inclusive of emotion or mood, affect and drive, as well as the other qualities such as self-reflectiveness. Personality maintains "a dynamic balance between internal drive, needs and desires, and internal or external forces that regulate the expression of these internal states in conformity with culturally given norms" (Stuss & Gow., 1992, p. 350). There are a variety of symptoms when the frontal lobes dysfunction that are clearly paradoxical in nature and may be a result of several factors. Firstly, the functional specificity of the different regions of the frontal lobes has not been clearly documented. Secondly, there are inadequate definitions of frontal lobe behaviour. Thirdly, the complexity of the frontal lobes relationship with other parts of the brain must be considered, they do not operate in isolation and in fact the pre-frontal cortex is the only cortical zone to receive information from all sensory regions (Stuss & Gow, p. ...read more.

6 Conclusion The writer concurs with Walsh (1991) that effective behaviour includes motivated, modifiable and appropriate behaviour that is free from disturbing internal influences such as disease and brain trauma. The frontal lobes are the part of the brain that effect such appropriate behaviour in that they control the executive functions of planning and initiating behaviour, changing the plans to be spontaneous and flexible or discontinue action in order to respond to familiar and new situations appropriately. Stuss and Gow (1992) attribute these functions to drive, and alongside mood and affect, they incorporate these three functions to define personality. They attribute frontal lobe damage to a disorder of personality, which includes an inability to be self-reflective and ascertain whether behaviour is appropriate, motivated or effective. Several other theories have described the reason and rhyme for effective behaviour. No one theory is comprehensive and a synthesis of all is necessary to explain frontal lobe anatomy and physiology. However, the frontal lobes alone cannot explain behaviour as they interact with practically every other part of the brain. While the frontal lobes might maintain executive control, they do not operate in isolation; rather it is the rich interconnection of the frontal lobes alongside other cortical structures as well as sub-cortical structures that effect efficient behaviour. It is usually by assessing damage to the frontal lobes that theorists have been able to ascertain the functionality of the frontal lobes by working retrospectively in assessing the symptoms that appear or the functioning that change or disappear with damage to the frontal lobes. Damage to the frontal lobes has variable and wide reaching consequences. The consequences are often not adequately described by looking at single sets of cognitive, emotional, social or personality symptoms. It is important to embrace an integrated approach and recognise that we cannot view certain symptoms in isolation - they are in fact entwined. It is imperative not to oversimplify the complexity of the consequences of frontal lobe damage to these areas of the brain by viewing only isolated consequences. ...read more.