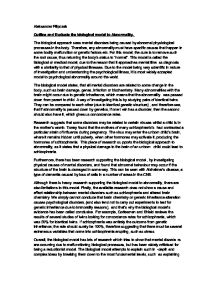 Outline and Evaluate the biological model to Abnormality.

Aleksander Filipczak Outline and Evaluate the biological model to Abnormality. The biological approach sees mental disorders being caused by abnormal physiological processes in the body. Therefore, any abnormality must have specific causes that happen in some bodily malfunction or genetic factors etc. For this model, the cure is to remove such the root cause, thus returning the body's status to "normal". This model is called the biological or medical model, due to the reason that it approaches mental illness diagnosis with a similarity to that of physical illnesses. Due to the model being very scientific in nature of investigation and understanding the psychological illness, it is most widely accepted model to psychological abnormality around the world. The biological model states, that all mental disorders are related to some change in the body, such as brain damage, genes, infection or biochemistry. ...read more.

Research suggests that some disorders may be related to certain viruses whilst a child is in the mother's womb. Torrey found that the mothers of many schizophrenic's had contracted a particular strain of influenza during pregnancy. The virus may enter the unborn child's brain, where it remains hidden until puberty, when other hormones may activate it, producing the hormones of schizophrenia. This piece of research supports the biological approach to abnormality, as it states that a physical damage to the brain of an unborn child could lead to schizophrenia. Furthermore, there has been research supporting the biological model , by investigating physical causes of mental disorders, and found that abnormal behaviour may occur if the structure of the brain is damaged in some way. ...read more.

For example, Gottesman and Shield reviews the results of several studies of twins looking for concordance rates for schizophrenia, which was 50% for identical twins. If schizophrenia was entirely the outcome from genetic inheritance, the rate should surely be 100%, therefore suggesting that there must be several extraneous variables that come into schizophrenia erupting, such as stress. Overall, the biological model has lots of research which tries to show that mental disorders are occurring due to malfunctioning biological processes, but has been widely criticised for being a reductionist model. The biological model attempts to explain such in-depth and complex ideas by breaking them down to the most fundamental levels, such as explaining abnormality in terms of brain cell activity or generic inheritance. However, it seems more likely that abnormality is caused by interactions of many complex factors, and should not be broken down into such simple theories. ...read more.

This essay is excellent. It provides a great level of detail in it's discussion of the biological model for identifying and treating abnormalities, and shows an in-depth understanding of the assumptions of the biological and scientific approaches to psychology, with ...

This essay is excellent. It provides a great level of detail in it's discussion of the biological model for identifying and treating abnormalities, and shows an in-depth understanding of the assumptions of the biological and scientific approaches to psychology, with specific reference to treating brain deficiencies. The answer focuses consistently on how the biological approach says abnormalities should be approached and how they can be observed using objective scientific methods, and the candidate also cites a number of biologically-orientated studies as empirical evidence for their discussion, forming a cohesive essay with strong factual groundings.

The Level of Analysis is not measured here, but AO1 (knowledge and understanding) is. The candidate demonstrates abilities of a very competent A grade candidate, and for the most-part their answer is perfect. Only minor issues can be found (e.g. writing "CNS" in non-abbreviated terms for those who are unfamiliar with the technology). Other than that, as stated before this candidate forms and excellent essay that touches on psychological studies as empirical evidence well. All assumptions about the approach are accurate and the knowledge about it's practises and beliefs are too. An excellent essay.

The Quality of Written Communication is also excellent. The information given, though complex, is easily digested because of clear and precise description about the biological approach and it's ideologies pertaining to human abnormalities. There is a good use of technical psychological terminology and these will help the the examiner get the impression of a confident individual comfortable with analysis that uses the language of the professional. There is no cause for concern with regards to spelling, grammar or punctuation.