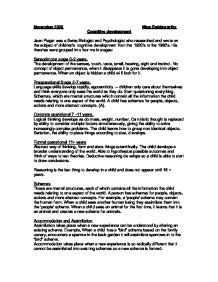 Jean Piaget was a Swiss Biologist and Psychologist who researched and wrote on the subject of children’s cognitive development from the 1920’s to the 1980’s. His theories were grouped into four main stages:

The development of the senses, touch, taste, smell, hearing, sight and instinct. No concept of object permanence, when it disappears it is gone developing into object permanence. When an object is hidden a child will look for it.

Language skills develop rapidly, egocentricity – children only care about themselves and think everyone only sees the world as they do. Start questioning everything. Schemas, which are mental structures which contain all the information the child needs relating to one aspect of the world. A child has schemas for people, objects, actions and more abstract concepts. (A).

Logical thinking develops as do mass, weight, number. Centristic thought is replaced by ability to consider multiple factors simultaneously, giving the ability to solve increasingly complex problems. The child learns how to group non identical objects. Seriation, the ability to place things according to size, develops.

Abstract way of thinking, form and elate things scientifically. The child develops a broader understanding of the world. Able to hypothesize possible outcomes and think of ways to test theories. Deductive reasoning develops so a child is able to start to draw conclusions.

Reasoning is the last thing to develop in a child and does not appear until 16 + years.

These are mental structures, each of which contains all the information the child needs relating to one aspect of the world. A person has schemas for people, objects, actions and more abstract concepts. For example, a ‘people’ schema may contain the human form. When a child sees another human being they assimilate them into the ‘people’ schema. When a child sees an animal for the first time, it learns that it is an animal and creates a new schema for animals.

Assimilation takes place when a new experience can be understood by altering an existing schema. Example, When a child has a “bird” schema based on the family canary, encounters a sparrow in the back garden it will assimilate sparrows in to the “bird” schema.

Accommodation takes place when a new experience is so radically different that it cannot be assimilated into existing schemas so a new schema is formed.

Piaget felt that children learn only when they are ready to learn and it also depends on the stage of their cognitive development.  He also theorised children should be taught through self discovery and by asking questions. Children should also be taught to understand the different views of others, along with the principle of logic that underpin schemas. (F) In applying these theories to education, children are grouped according to age (stage) and then further grouped in ability. The teaching methods used today such as Class discussion, written work, group work, research (self discovery) and practical work are tailored to educate to the stage which children are at. The use of regular ability tests such as SATS, make sure a child is working to within the criteria of their learning ability and should it fail to reach “standards” then extra help is giving. Not all of Piaget’s theories are used in education as ability is a very individual thing and children develop at different stages. This is why the government had an education overhaul and children are now grouped according to ability rather than age. This has led to some children who are at year 3 (7 years of age) being taught at year 5 (10 years of age) levels. Children, however do not start secondary education until they are 11 years old which does not make sense if the child has been taught at a higher level due to ability.

At pre-school, the staff monitor and assess a child continually to ascertain what level of development the child is at. The child is then worked with, and encouraged, according to ability and bought up to the expected level that they should be at in preparation for reception year at school. In reception year, again, the child is continually assessed and monitored and schooled appropriately until they reach the level to which they should be at. This continues throughout schooling. Once in Year one, the children are then grouped within their year according to ability and maturation as some children learn and develop quicker than others.

(B). According to Piaget, “Learning is what results from both mental and physical maturation plus experience” (Excerpt from (C) ) In contrast, Vygotsky observed that learning process lead development (D), Vygotsky maintained that “ Learning is a necessary and universal aspect of the process of developing culturally organised, specifically human, psychological functions. (E) In other words, learning is what leads to the development of higher order thinking. Explained, Piaget’s theory is that children cannot learn unless they have gone through the expected stage of development both physically and mentally and if they have not experienced it they will not learn. Vygotsky theorises that in order to develop physically and mentally, then the child must learn from experience before they develop.

Although the writer has covered the main features of Piaget's theory there could have been much more detail about the cognitive stages of development, including evidence of these through Piaget's experiments. Also there should have been more detail about schemas, assimilation, accommodation, equilibrium and disequilibrium, since this also explains cognitive development according to Piaget.

It would be helpful to write a plan beforehand to give the essay a better structure.