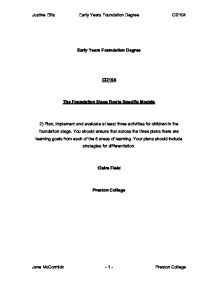 Plan, implement and evaluate at least three activities for children in the foundation stage. You should ensure that across the three plans there are learning goals from each of the 6 areas of learning. Your plans should include strategies for differentiat

Early Years Foundation Degree CI2104 The Foundation Stage Route Specific Module 2) Plan, implement and evaluate at least three activities for children in the foundation stage. You should ensure that across the three plans there are learning goals from each of the 6 areas of learning. Your plans should include strategies for differentiation. Claire Field Preston College Introduction The purpose of this work is to review the nature and content of the foundation stage curriculum and to consider the theoretical underpinning and underlying principles that have assisted in the formation of this early years practice. Through the planning and implementation of three activities, spanning the full spectrum of the foundation stage curriculum, the writer aims to identify and meet the needs of foundation stage children. This work will then evaluate the provisions for these children and investigate further the ways in which differentiation strategies can be implemented to ensure all children, regardless of their abilities, or stage of development, may receive the curriculum, delivered in a style appropriate to them and their own personal requirements. In 1988 the Conservative government, under the leadership of Margaret Thatcher, legislated that a National Curriculum be in force for pupils between the ages of 5 and 16, because she believed that 'a good educational system was essential for the future success of the nation' (Ridley, 1992, p92) Although a curriculum was in place for ages 5 to 16, there was a distinct lack of standardised learning for the early years. Margaret Hodge joined the Department for Education in 1998 and was responsible for reforming pre-school education policy (www.news.bbc.co.uk 12/10/2006). She was actively involved in the implementation of the Foundation Stage Curriculum in September 2000 and the publishing of the guidance to accompany this. The abilities of children are multifaceted and the foundation stage curriculum gives practitioners a much less rigid approach than the National Curriculum, by following the children's progress using stepping stones. ...read more.

This learning experience was successful because it was an epistemic activity, which also brought in ludic play with the measuring of the water. The classroom assistant had the balance of free play and guided play just right and the children progressed well and interacted admirably with each other. The children were interested throughout the activity and as suggested by McMillan, as they were outside the classroom environment, the mood stayed calm the whole time. Learning Experience Two The second learning experience is carried out in the role play area. It is one of the continuous provisions within the classroom and it has been utilised for the purpose of this lesson. For this activity, the role play area is set up as an Italian take-away. It has been equipped with a small world cooker and microwave, stationary, telephones and some pizzas. The pizzas had been made by the children in a previous activity and they had also made toppings to be added. The children have the opportunity to place orders, take orders and prepare orders for either collection, or delivery. Two girls are participating in this activity. One is aged four years and two months and the other is aged four years and six months. Communication, language and literacy and knowledge and understanding of the world are the areas of learning this activity is testing. The objectives are to provide children with the opportunity to communicate effectively on a given topic and to stay focused on this subject. Steiner believes that giving children of mixed abilities the opportunity to create self-expression through imaginative play, allows them to develop to their full potential (Palmer, 2001). By participating in this way, the children are learning to use the equipment in a way that enables this interaction and feed their imagination. The practitioner involved with this activity plays an important role in the children's development. They will interact with the children and give appropriate guidance to them where and when it is required. ...read more.

believes that behaviour is not something a child is born with, it is shaped by consequences. The conditioning adopted by the setting determines the catalogue of behaviour the child has at his disposal (cited in Palmer 2001). Skinner recognised that children respond to positive re-inforcement. The practitioner in this activity praises the children, encouraging them to express themselves further. Bandura suggests that adults can gain children's attention and highlight the behaviour patterns they want to encourage (David T et al, 2003). He suggests that the children will mimic the behaviour they see in others. In this activity, if the children see the practitioner praising one child as suggested by Skinner, their behaviour will be reinforced and this should encourage more of this behaviour. As the rest of the children bear witness to this development, Bandura suggests that they will reproduce this behaviour to gain recognition for themselves. This was apparent when watching the behaviour of the whole class. When one child became slightly over-excited and silly, others began to imitate him. The practitioner quickly took control of the situation by praising one of the children who was making slower, more gentle movements and the children responded swiftly by slowing their movements down too. Conclusion Each one of these activities proved to be successful. The children enjoyed them and were keen to stay on task throughout. The relevant areas and aspects of learning were adequately covered and the children gained a great deal from participating. From carrying out this research, it is apparent that it is necessary for practitioners to plan their scheme of work effectively in order to guarantee that the foundation stage curriculum is covered throughout the year. This work has examined the long, medium and short term plans and has explained why they are used. It has researched the emergence of the foundation stage curriculum and the ways it can be adapted and moulded to fit into many different types of early years settings. Using the three activities this work has established the theoretical underpinning of the curriculum and demonstrates the strategies which can be applied to differentiate the experiences effectively. ...read more.