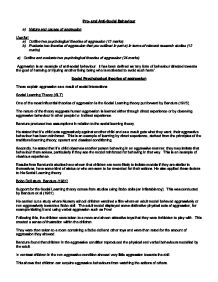 Pro- and Anti-Social Behaviour a) Nature and causes of aggression Use for: a) Outline two psychological theories of aggression (12 marks) b) Evaluate two theories of aggression that you outlined in part a) in terms of relevant research studies (12 marks) a) Outline and evaluate two psychological theories of aggression (24 marks) Aggression is an example of anti-social behaviour. It has been defined as 'any form of behaviour directed towards the goal of harming or injuring another living being who is motivated to avoid such harm'. Social Psychological theories of aggression These explain aggression as a result of social interactions Social Learning Theory (SLT) One of the most influential theories of aggression is the Social Learning theory put forward by Bandura (1973). The nature of the theory suggests human aggression is learned either through direct experience or by observing aggressive behaviour in other people i.e. indirect experience. Bandura produced two assumptions in relation to the social learning theory. He stated that if a child acts aggressively against another child and as a result gets what they want, their aggressive behaviour has been reinforced. This is an example of learning by direct experience, derived from the principles of the traditional learning theory; operant and classical conditioning. Secondly, he stated that if a child observes another person behaving in an aggressive manner, they may imitate that behaviour them selves, particularly if they see the model reinforced for behaving in that way. This is an example of vicarious experience. Results from Bandura's studies have shown that children are more likely to imitate models if they are similar to themselves, have some kind of status or who are seen to be rewarded for their actions. He also applied these factors to his Social Learning theory. Bobo Doll study Bandura (1961) Support for the Social Learning theory comes from studies using Bobo dolls (an inflatable toy). This was conducted by Bandura et al (1961). ...read more.

At each stage of this model, observers may make a decision that inhibits helping. For example, when observing others who are not helping, they may dismiss the situation as not being an emergency (stage 2), they may feel that the presence of others makes their intervention unnecessary (stage 3), they may decide that they lack the necessary skills for effective intervention (stage 4) or they may decide that it is against their interests (e.g. it may be dangerous) to intervene (stage 5). Latene and Darley identified two psychological processes to explain the social inhibition effect (i.e. not helping). The first of these is diffusion of responsibility. If one person is present at an emergency, they have 100% responsibility to help. However, if an emergency is witnessed by more than one person, the less the personal responsibility there is for any one individual bystander. This diffusion of responsibility explains the inhibition of helping behaviour in stage 3. The second process identified is pluralistic ignorance, which focuses on what happens when we look to other bystanders in order to decide whether help in necessary. If others are not helping, we may conclude that it is not an emergency so do nothing. Real emergencies may fail to bring about help because bystanders inhibit each others behaviour. This pluralistic ignorance explains the inhibition of helping behaviour in stage 2. Evidence that supports the Decision Model In support for the decision model, the predicted behaviours are supported by research studies. Support for Stage 1 of the Decision Model: Darley and Batson (1973) showed that students who were rushing to a lecture were less likely to help a man moaning and many said it was because they had not noticed. Support for Stage 2 of the Decision Model: Darley et al (1973) found that bystanders who stood face to face with other bystanders were more likely to help in an emergency than those who stood back to back. ...read more.

There have also been anecdotal claims of copycat acts of violence. For example the two boys who murdered James Bulgar were said to have been inspired by the video 'Childs Play'. However, there is no real evidence for this and Cumberbatch (2001) reports that no link was ever found. Furthermore, Hearold (1986) provided evidence that pro-social behaviours can also be learned from observing positive role models on television, especially if the models are rewarded for their behaviour. He also stated that it seems that the influence of television on pro-social behaviour is stronger than antisocial behaviour. All of the above explanations provide evidence that media can have an anti-social effect on behaviour. Further Research Evidence Research studies also support the view that media can have an anti-social effect on behaviour. For example Parke et al (1977) showed that aggression in delinquent boys rose if they watched violent films at home. In contrast, no change in aggressive behaviour was observed if they view non-violent films. However, it is hard to evaluate research conducted into the effects of media on anti-social behaviour because many of the studies are limited in scope, focusing only on the short term effects on behaviour of exposure to a single violent programme. Criticisms of research into the effect of media on anti-social behaviour Researchers have suggested that the media has no effect on aggression. Howitt and Cumberbatch (1974) conducted an analysis of 300 studies, which led to the conclusion that television violence does not influence children's behaviour. A further criticism of explanations and research into the effect of media on anti-social behaviour is that there may be important individual differences which have to be taken into account. For example, people who are more aggressive may choose to watch anti-social programmes and are more influenced by them. Overall Evaluation Overall, evidence shows that media influences can have anti-social effects on behaviour. However, evidence has also been provided which claims it can also have pro-social effects. This suggests media may have both, depending on the context contained within the programme. ...read more.