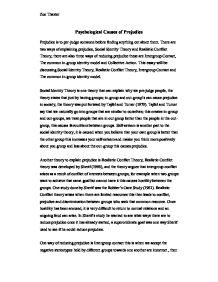 Psychological Causes of Prejudice Prejudice is to per-judge someone before finding anything out about them. There are two ways of explaining prejudice, Social Identity Theory and Realistic Conflict Theory, there are also three ways of reducing prejudice these are Intergroup Contact, The common in-group identity model and Collective Action. This essay will be discussing Social Identity Theory, Realistic Conflict Theory, Intergroup Contact and The common in-group identity model. Social Identity Theory is one theory that can explain why we pre-judge people, the theory states that just by having groups; in-group and out-group's can cause prejudice in society, the theory was put forward by Tajfel and Turner (1970). Tajfel and Turner say that we naturally go into groups that are similar to ourselves; this creates in-group and out-groups, we treat people that are in our group better than the people in the out-group, this causes favouritism between groups. ...read more.

In Sherif's study he wanted to see what ways there are to reduce prejudice once it has already started, a superoridinate goal was one way Sherif used to see if he could reduce prejudice. One way of reducing prejudice is Intergroup contact this is when we accept the negative stereotypes held by different groups towards one another are incorrect , then the two groups will see common sense and get on better, this will happen when the two groups are in contact with one another more. Deutch and Collins (1951) done a survey on American's that lived in housing projects, they found out that people who lived in mixed racial housing projects had a more positive attitude towards black people. Wilson and Akert (1994) acknowledged that there were six conditions that were needed to be met before contact will reduce prejudice, these are that groups must depend on each other, groups must share common goals and ...read more.

Gaertner also believes that by weakening the 'us and them' boundaries will make us think more positively about other groups and we should also increase the contact between groups this should make prejudice reduce naturally. In 1990 Gaertner demonstrated that cooperative interaction leads people to redraw in-group and out-group boundaries. Most of Gaertner's experiments were laboratory experiments however they lack ecological validity; however there are real-life situations where people are forced to reclassify themselves to cooperate. The common in-group identity model by Gaertner devised a strategy based on intergroup cooperation to increase cooperation, some studies have shown that this works in reducing prejudice, there are also real-life situations where people do reclassify themselves into common in-groups through cooperation, this seems to be affective in different circumstances. However there are so disadvantages to Gaertner's approach because it relies on the members of different groups being willing to cooperate, this cannot sometimes be practical. Also in some cases other group dynamics interfere with effective cooperation. ?? ?? ?? ?? Zoe Thaxter ...read more.