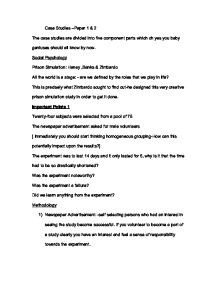 Case Studies -Paper 1 & 2 The case studies are divided into five component parts which oh yes you baby geniuses should all know by now. Social Psychology Prison Simulation: Haney ,Banks & Zimbardo All the world is a stage: - are we defined by the roles that we play in life? This is precisely what Zimbardo sought to find out-he designed this very creative prison simulation study in order to get it done. Important Points 1 Twenty-four subjects were selected from a pool of 75 The newspaper advertisement asked for male volunteers [ Immediately you should start thinking homogeneous grouping-How can this potentially impact upon the results?] The experiment was to last 14 days and it only lasted for 5, why is it that the time had to be so drastically shortened? Was the experiment noteworthy? Was the experiment a failure? Did we learn anything from the experiment? Methodology 1) Newspaper Advertisement: -self selecting persons who had an interest in seeing the study become successful. If you volunteer to become a part of a study clearly you have an interest and feel a sense of responsibility towards the experiment. 2) Subjects were predominately white and middle class. This implies that the subjects are from similar backgrounds, and so share similar experiences. In such cases we call them a homogeneous group. A homogeneous group because of their similar experiences are not likely to be representative of the wider population. Consequently results are likely to reflective of them, not the general population. In this instance we may only have learn how a prison population with predominately white males from a middle class background is likely to behave. Remember the purpose of much of research is to generalise to the wider population. 3) Thumbs up for the use of questionnaires and an interview, which were used to screen the subjects. Thumbs down - what constituted healthy? ...read more.

that they performed were likely to impact upon their receiving help. More trials 65 were carried out with the cane condition than the drunk condition 38. The gender of the victims could have played a role as they were all male. The ethnicity of the model could also be of significance. [Note:- The cane victim received spontaneous help(help before the model could act) 62-65 times-the drunk victim 19-38-Read what was said about the potential impact of the conditions-Seeing a young man with a cane we are likely to help because we may think that to carry a cane at this stage of his life must mean that something is wrong with him-in contrast a drunk young man must be a bum] Persons could have been forced to help because unlike in the real world such as on the street they could pass by, in the carriage they were stuck/faced with the situation and so may have been compelled to act. [Also note the age, gender, and race of both the victims and the helper (model)] Ecological Validity The experiment took place in a real life situation-pro ecological validity (EV) The experiment was testing for a concept developed in the lab-con EV In most real life situations individuals have the opportunity to walk away Both males and females are victims in real life Ethics Persons took part in an experiment of which they were not aware-never had the opportunity to reject or accept. The train company was not made aware that an experiment was taking place on their trains. Social Implications Research concepts developed in the lab, may be valid only in the lab and not relevant to real life situations. Beliefs about physical stature may affect how males and females conceptions about themselves. Race may make persons more sympathetic or less sympathetic to each other under adverse situations. Researchers need to test more of their laboratory concepts in the real world. ...read more.

How will different people see and agree on the same thing Despite using two independent observers only 51 of the children were used. The missing 13 may have been uncommonly aggressive and may have changed the results. Two of the observers knew the children this could have made their judgements subjective This study may have consisted of uncommonly aggressive children. We may merely be finding out how aggressive children imitate aggression not how aggression is learnt. The control group despite not having models shows comparable levels aggression despite not having aggressive models. This means these children could have been uncommonly aggressive. Ecological Validity If the children were uncommonly aggressive the study may not have measured how aggression is learnt, and it may not have shown if aggression is innate because the children's environment may have resulted in their uncommon aggressiveness. The children may merely have imitated adult behaviour instead of actually learning aggressive behaviour. Children don't normally have to view aggressive acts without adults present to provide explanations, e.g. parents, adult supervisors interpret television information for the children. The situation the children found themselves in was rather artifical In today's everchanging world unfortunately children are increasingly being forced to interpret information for themselves as they are babysat by televisions. Boys made more aggressive acts than girls, for evidence of this validity take no further look than our prisons. Girls showed more verbal aggression than did boys, this would provide evidence for the popular belief that females are more verbal than males. Ethics Observing the children through a one way mirror. This was done without permission from their parents. The children were deliberately upset by the experimenters. Not allowing the children to play with the toys. 9note reason given why was designed to upset the child) Intimidating the children to stay in a room in stage 3 of the experment-what else did you think that was? The children would have left otherwise. Social Implications Boys made more aggressive acts, than did girls. This shows that males more likely to become aggressive than females. It is expected of them in society. ...read more.