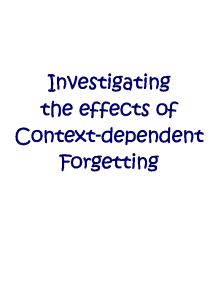 Investigating the effects of Context-dependent Forgetting Project brief for psychology coursework PB1: Identify the aim of the research and state the experimental/alternative Aim: to investigate recall of words within the same environment, in which they are learnt, and in a different environment. Consequently, we will see if context affects recall. Alternative hypothesis: Participants who carry out recall within the same room as they are learnt, will be more successful than the contrary group. Null hypothesis: There will be no difference in word recall between the two groups. Any difference will do due to chance alone. PB2: Explain why a directional or a non-directional experimental/alternative hypothesis has been selected. (1 mark) A directional hypothesis was chosen, as there is previous research to support the idea that context influences recall of information, for example: the work of Abernathy (1940) and Godden and Baddeley (1975). PB3: Identify the chosen research method (experimental, quasi-experimental, natural experiment, survey, observation, content analysis or correlation research) and, if appropriate, the design used. (1 mark) The chosen research method is a laboratory experiment, enabling control over confounding variables. Additionally, my chosen research design is an independent groups, which prevents any possibility of the 'order effect'. Participants were an opportunist sample. PB4: Identify the advantages and disadvantages of the chosen research method. (2 marks) Advantages: it is easy to replicate, as potential confounding variables are easier to control, compared to other settings. Disadvantages: a laboratory experiment is an artificial setting and significantly different to real-life situations, due to the high levels of control. Demand characteristics can also occur, when participants try to act accordingly to the situation. Although independent measures prevents the 'order effect', finding twice as many participants can be time consuming. PB5: Identify potential sources of bias in the investigation and any possible confounding variables. (2 marks) Potential sources of bias: 1) Results could be affected by communication between participants. ...read more.

The independent variable was the room where recall took place, e.g. either in the same room as where the words were learnt or in a different room. The dependent variable was the amount of words recalled by participants. The controlled confounding variables include the wordlist given to all participants. Wordlists have to be the same for all participants to ensure that the results of the study are not affected by any differences in the wordlists. Furthermore, the task to prevent rehearsal for the two groups had to be constant, as did the noise and temperature within the environment. Consequently, this would make any impact on the results unlikely. Participants: Thirty-two participants were involved altogether, consisting of 16 work colleagues in each condition. Each group was divided equally into eight men and eight women, ensuring that the results were not influenced by any difference in performance between the sexes. Participants' ages ranged from 25 - 45 and were accordingly divided fairly amongst the two test groups. The sampling method was an opportunist sample, whereby selection was based on anyone who was available for testing at the required time. Apparatus/materials: > Consent forms (Appendix A) > Task instructions (Appendix B) > Wordlists (Appendix C) > Crossword puzzles (Appendix D) > A stopwatch > Plain paper & Pencils Procedures: All participants were taken to Room 1, where all equipment had been previously given out. Wordlists were faced down. There were two pencils on each desk and a piece of plain paper. Participants were asked to enter the room, sit down, not to touch any of the equipment on their desk and not to communicate with anyone until told to do so. Instructions were then read to participants and I made sure that all involved fully comprehended what was being asked of them. As soon as participants were ready, they had two minutes to remember as many words as possible from the given wordlist. ...read more.

If a well published and credit worthy reliable research study was carried on this topic, then it would help to raise the profile of this important subject matter and, would be extremely beneficial to the world of education and may instigate a positive change to the testing of students. Conclusion The null hypothesis, which stated that there would be no difference in word recall between the two conditions, but any difference would be due to chance alone, was rejected and the alternative hypothesis was accepted. This supports the fact that any absence of external cues would result in context-dependent forgetting, meaning poorer recall. References Abernathy, E.M. (1940) The effects of changed environmental conditions upon the results of college examinations. Journal of Abnormal Psychology, 10, pp.293-301. Brown, R. and McNeil, D. (1966) The 'tip of the tongue' phenomenon. Journal of Verbal Learning and Verbal Behavior, 5, pp.325-337. Chu, S., Handley, V. and Cooper S. (2003) Eliminating context -dependent forgetting: Changing contexts can be as effective as reinstating them. British Journal of Psychology, 53, pp.549-559. Godden, D and Baddeley, A. (1975) Context-dependent memory in two natural environments: On land and under water. British Journal of Psychology, 66, pp.325-331. Goodwin, D.W., Powell, B., Bremer, D., Hoine, H. and Stern J. (1969) Alcohol and recall: State dependent effects in man. Science, 163, 1358. Groome, D. (2004) An Introduction to Cognitive Psychology: Processes and Disorders. Sussex, Psychological Press Ltd Hill, G. (2001) A Level Psychology through diagrams. Memory: Forgetting in long-term memory, pp.110-111. McCormick, L.J. and Mayer, J.D. (1991) Mood-congruent recall and natural mood. Poster presented at the annual meeting of New England Psychological Association, Portland, ME. Smith, S.M. (1979) Remembering in and out of context. Journal of Experimental Psychology: Human Learning and Memory, 5, pp.460-471. Waugh, N.C. and Norman, D.A. (1965) Primary memory. Psychological Review, 72, pp.89-104. Williams, M.D. and Hollan, J.D. (1981) The process of retrieval from very Long-term memory. Cognitive Science, 5, pp.87-119. ...read more.