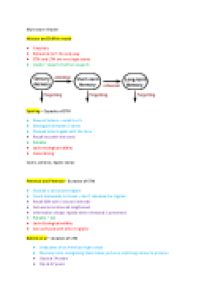 Memory improvement techniques Mnemonics ? system such as a pattern of letters, ideas or associations to help remember Something * Method of loci ? associating words with places * Method of peg word system ? associating words that are similar in sounding Encoding and retrieval ? recall better if the retrieval context is like the encoding context Geiseman and Glenny ? * List of words * Imagine and female or male voice * Recall a list of new words and some old * More successful if the voice presenting was the one they imagined * Recalling in the same place or same environment can help Chunking ? gathering all information together Katona * List of numbers * Hard to recall * Put comas in them * Easy to recall and see they were square numbers Active processing ? Craik and lockhart * Group 1 ? structural questions * Group 2 ? carry out acoustic task * Group 3 ? semantic task * Group 4 ? no task * Group 3 performed as well as group 4 and better than 1 and 2 * Meaningful engagement can lead to better recall ...read more.