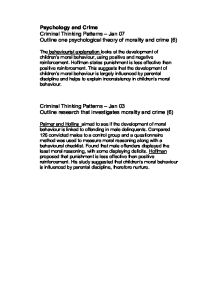 Psychology and Crime Criminal Thinking Patterns - Jan 07 Outline one psychological theory of morality and crime (6) The behaviourist explanation looks at the development of children's moral behaviour, using positive and negative reinforcement. Hoffman states punishment is less effective than positive reinforcement. This suggests that the development of children's moral behaviour is largely influenced by parental discipline and helps to explain inconsistency in children's moral behaviour. Criminal Thinking Patterns - Jan 03 Outline research that investigates morality and crime (6) Palmer and Hollins aimed to see if the development of moral behaviour is linked to offending in male delinquents. Compared 126 convicted males to a control group and a questionnaire method was used to measure moral reasoning along with a behavioural checklist. Found that male offenders displayed the least moral reasoning, with some displaying deficits. Hoffman proposed that punishment is less effective than positive reinforcement. His study suggested that children's moral behaviour is influenced by parental discipline, therefore nurture. Explanations of criminal behaviour - Jan 04 Outline one study of individual or cultural differences on criminal behaviour (6) Hare describes psychopaths as "arrogant, dominant, manipulative..." and believes that these personalities are due to individual differences and psychopaths living socially deviant lifestyles. Hare believes they have child like behaviours, such as ADHD and social factors cause psychopathy. ...read more.

Offender Profiling - June 04 Outline one technique used to produce and offender profile (6) A technique used is the British Approach - the "Bottom up approach" which looks for consistencies in offenders behaviour during the crime and forms psychological theories based on these which show how and why the behaviour occurred. The five factor model is based on five aspects of interaction between the victim and offender (Canter) Interpersonal Coherence Criminal characteristics Criminal career Forensic awareness Significance of time and place Psychology of testimony BP1 METHODS USED TO INVESTIGATE CONGITIVE PROCESSES One method used to investigate cognitive processes are lab experiments, which can be low in ecological validity due to showing P's events that are not real and asking questions about them. Loftus and Palmer showed P's films of car accidents in a lab before asking them questions including a critical question. This suggests that due to the situation of crime being artificial, tells us little about what factors will affect us in a real case therefore less useful. BP1 RELIABILITY OF CONGITIVE PROCESSES AND TESTIMONY Reliability is when the research can be replicated and more information on cognitive processes gathered each time it is repeated due to factors affecting processing being manipulated. Therefore, controls will be an issue. ...read more.

This means that it is low in usefulness as the sample is not representative, meaning that the results cannot be generalised to everyone who is a witness to a car accident. Validity is when the research measures how memory of an event or suspect is affected by different factors, so altering how it demonstrates problems with identification. Confounding variables are an issue when looking at validity as variables affecting suspect identification and memory outside of our controls making research less likely to be what you set out to measure. In Pickel's study of weapons focus, confounding variables such as other distractions in the room whilst watching the videotape, may lead to distortion of memory and queries whether the weapon was the true distraction. This means that confounding variables affect eyewitness testimony which could have implications, lowering the validity of the study. Reliability is an issue when examining validity as research into eyewitness testimony as the research needs to be reliable so that the same results can be found each time with similar outcomes so that EWT are accurate in the courtroom to aid investigations and prevent innocent people from being wrongly convicted. Loftus et al showed participants two different films, P's only saw either the gun or cheque which makes it easy to compare the effect of weapons on testimony and makes the study easy to repeat. This means that different factors affect our memory, which may become distorted so reliability reduced. ...read more.