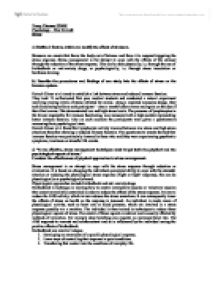 Tracy Thomas 12MW Psychology - Mrs Carroll Stress a) Outline 2 factors, which can modify the effects of stressors. Stressors are events that throw the body out of balance and force it to respond triggering the stress response. Stress management is the attempt to cope with the effects of the stressor through the reduction of the stress response. This can be done physically, i.e. through the use of biofeedback or anti-anxiety drugs, or psychologically, i.e. through stress inoculation or hardiness training. b) Describe the procedures and findings of one study into the effects of stress on the immune system. Keicolt-Glaser et al aimed to establish a link between stress and reduced immune function. They took 75 self-selected first year medical students and conducted a natural experiment involving varying levels of stress inflicted by exams. Using a repeated measures design, they took blood samples from each participant - once a month before exams and again on the day of their final exams. This demonstrated low and high stress levels. ...read more.

Biofeedback can involve 3 stages; 1. Developing an awareness of a specific physiological response. 2. Learn ways of controlling that response in quiet conditions. 3. Transferring that control into the conditions of everyday life. Biofeedback has been found to produce short and long term reductions in physical stress responses and the return to a level of homeostasis following the disruption in the body's natural functions caused by stress. Biofeedback does not have to only be applied to stress. Dworkin and Dworkin (1988) worked with teenagers suffering from scoliosis. The teenagers successfully used biofeedback techniques to learn how to control the muscles of their spine, thus altering their posture and allowing them to overcome the disorder. This also demonstrates the relative successes of biofeedback. Biofeedback produces a sense of control rather than just eliminating the physiological stress response. Unlike other physiological treatments for stress, such as drugs, this treatment is non-evasive and has no side effects allowing it to be used over the long term with much success. The problems involved with biofeedback are that it is difficult to tell apart from relaxation methods, making it difficult to tell which is more successful. ...read more.

They do not affect brain activity. An advantage is that beta-blockers do not cause a dependency though a problem could be recognised in that it does not target the problem only the symptoms. As with all anti-anxiety drugs there are side effects such as cold extremities, fatigue, nightmares and hallucinations. Buspirone is the most recent of the anti-anxiety drugs. It helps the effects of the neurotransmitter serotonin. It does not have sedative effects but does have side effects such as headaches and depression although there are no withdrawal symptoms. Anti anxiety drugs can be very effective in reducing the intense feeling of anxiety associated with stress though a despite this they have many flaws. A major flaw in the use of drugs to combat anxiety is that fact that they do not attack the problem causing anxiety only the responses to the anxiety as a result the problem may reoccur causing a vicious cycle involving anxiety and drug dependency. It is advised that drugs should only be used for a short-term severe cases and so do not solve long-term problems though they can cause further long terms problems through their use due to dependency and side effects. ...read more.