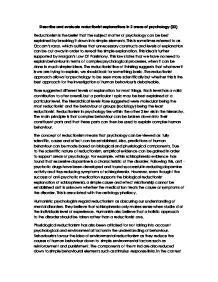 Describe and evaluate reductionist explanations in 2 areas of psychology (30) Reductionism is the belief that the subject matter of psychology can be best explained by breaking it down into simple elements. This is sometimes referred to as Occam's razor, which outlines that unnecessary constructs and levels of explanation can be cut away in order to reveal the simple explanation. This idea is further supported by Morgan's Law Of Parsimony. This law states that we have no need to explain behaviour in terms of complex psychological processes, when it can be done in much simpler ideas. The reductionist line of thinking suggests that whatever it is we are trying to explain, we should look for something basic. The reductionist approach allows for psychology to be seen more scientifically but whether this is the best approach for the investigation of human behaviour is debateable. ...read more.

For example, within schizophrenia evidence has found that excessive dopamine is a characteristic of the disorder. Following this, anti-psychotic drugs have been developed and found successful in reducing dopamine activity and thus reducing symptoms of schizophrenia. However, even thought the success of anti-psychotic medication supports the biological reductionist explanation of schizophrenia, a simple cause and effect relationship cannot be established as it is unknown whether the medication treats the cause or symptoms of the disorder. This is associated with the aetiology phallacy. Humanistic psychologists regard reductionism as obscuring our understanding of mental disorders. They believe that schizophrenia only makes sense when studied at the individuals level of experience. Humanists also believe that a holistic approach to the disorder should be taken rather than a reductionist one. Physiological reductionism has also been criticised for not taking into account psychological and environmental factors in the understanding of behaviour. ...read more.

However, the scientific approach does allow for increasingly accurate research findings by taking account of physiological and biological research findings. With the humanistic stance cause and effect cannot be tested unless behaviour is reduced to simple components, but this goes against the idea of humanism. It has been argued that because the humanistic approach is not scientific it has no place within the explanation of human behaviour. The rejection of biological and physiological aspects is unrealistic as they do have a significant effect and do therefore need to be considered. Although this is true, reductionism does not work well for some explanations e.g. Freud. Reductionism is also sometimes confusing rather than clarifying as it is intended to be. Some have said that the attempt to offer a single causal explanation for human behaviour is futile and misleading but Eysenck said that some ideas do lend themselves to reductionism. ...read more.

This is a very confident, very succinct, and very well-expressed essay that proposes clear ideas about the role of Reductionism in Psychology. The candidate nicely satisfies the question, though perhaps a little more could be said with regards to the ...

This is a very confident, very succinct, and very well-expressed essay that proposes clear ideas about the role of Reductionism in Psychology. The candidate nicely satisfies the question, though perhaps a little more could be said with regards to the Humanistic approach. But even so, I greatly commend the candidate for not opting to do something more simplistic such as two approaches the advocate reductionist tendencies like the physiological approach and the cognitive approach, or the cognitive approach and the behaviourist perspective. It would be interesting to contrast one of these with the psychodynamic perspective, but it is easy to see why any candidate would want to avoid it as it really does stick out (by being the only staunchly reductionist approach/perspective that isn't at all scientific). So all in all, this response is excellent as it shows a very adept knowledge of psychology and how to form a fair evaluation of studies that feature reductionism.

The Level of Analysis is good. The candidate proposes a nicely balanced discussion about the role and uses of reductionism of psychology; how it can aid psychologists and how it can hinder the validity of research, particularly in approaches that view human behaviour as more of a results of everything they've ever done or felt rather than something as a result of one small environmental or biological influential factor. There is a good understanding of the birth of these theories and how to explain them so even non-psychology students can understand.

The Quality of Written Communication is flawless. The candidate writes so clearly and precisely throughout the answer that the examiner would have a very clear indication of the abilities of this candidates. They have a very good level of knowledge of how to implement key words and specialist terminology into their evaluations. There is also no cause for concern with regards to grammar, spelling or punctuation.