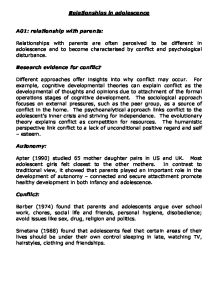 Relationships in adolescence A01: relationship with parents: Relationships with parents are often perceived to be different in adolescence and to become characterised by conflict and psychological disturbance. Research evidence for conflict Different approaches offer insights into why conflict may occur. For example, cognitive developmental theories can explain conflict as the developmental of thoughts and opinions due to attachment of the formal operations stages of cognitive development. The sociological approach focuses on external pressures, such as the peer group, as a source of conflict in the home. The psychoanalytical approach links conflict to the adolescent's inner crisis and striving for independence. The evolutionary theory explains conflict as competition for resources. The humanistic perspective link conflict to a lack of unconditional positive regard and self - esteem. Autonomy: Apter (1990) studied 65 mother daughter pairs in US and UK. Most adolescent girls felt closest to the other mothers. In contrast to traditional view, it showed that parents played an important role in the development of autonomy - connected and secure attacthment promote healthy development in both infancy and adolescence. ...read more.

Durkin (1997) pointed out that conflicts occur between any individuals sharing a household. Critisisms: 1) Face validity: conflict with parents has face validity because it is commonly experienced during adolescence. But it may be that that these conflicts are relatively minor and so their existence is not as defining of adolescence as early research suggests. 2) Criticisms of self report: the research evidence against conflict may be biased by the social desirability effect. Whereby the participant wants to be present him or herself in the best light and so negates any problems within the parental relationship. Our demand characteristics may cause a biased response. Self report is highly vulnerable to such researcher and participant effects, and this invalidates the research. Relationship with peers: A01 Peer influences increases during adolescence. Peer groups help provide emotional support, and their acceptance provides adolescents with self confidence as well as security outside the family, allowing them to explore different ideologies, also testing their abilities to form relationships. ...read more.

Criticisms: 1) Strong research evidence: the amount and variety of research on the peer group provides indisputable evidence of its influence of adolescents. 2) Researcher bias: Harris group socialisation theory is controversial as it is difficult to accept that individual parents don't matter. This of course is a subjective viewpoint and so may lack validity. 3) Advantages of peer socialisation: the research evidence on the beneficial effects of the peer group, such as a sense of belonging and self- confidence, leads to the conclusion that peer group integration is very important to psychological well - being and successful assimilation of adult roles. 4) Multi - perspective: the problem with any research on social factors is that this tends to ignore the internal factors and so doesn't account for individual differences. Thus, whilst it is important to recognise the importance of social factors, a multi - perspective is needed to fully understand adolescent relationships. Conclusions: Humans are capable of multiple attachments and so an increase in attachment to peers does not necessarily decrease parental ties. Parents and peers have different areas of influence. ...read more.