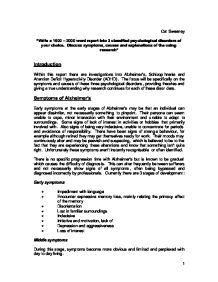 report into 3 classified psychological disorders of your choice. Discuss symptoms, causes and explanations of the using research

Cat Sweeney "Write a 1500 - 2000 word report into 3 classified psychological disorders of your choice. Discuss symptoms, causes and explanations of the using research" Introduction Within this report there are investigations into Alzheimer's, Schizophrenia and Attention Deficit Hyperactivity Disorder (ADHD). The focus will be specifically on the symptoms and causes of these three psychological disorders, providing theories and giving a true understanding why research continues for each of these disorders. Symptoms of Alzheimer's Early symptoms at the early stages of Alzheimer's may be that an individual can appear dissimilar, not necessarily something to pinpoint. Their persona can seem unable to cope, minor interaction with their environment and unable to adapt to surroundings. Some signs of lack of interest in activities or hobbies that primarily involved with. Also signs of being very indecisive, unable to concentrate for periods and avoidance of responsibility. There have been signs of strange behaviour, for example although retired they may get themselves ready for work. Their moods may continuously alter and may be peevish and suspecting, which is believed to be to the fact that they are experiencing these alterations and know that something isn't quite right. Unfortunately these symptoms aren't instantly recognisable or often identified. There is no specific progression time with Alzheimer's but is known to be gradual which causes the difficulty of diagnosis. This can alter frequently between sufferers and not necessarily show signs of all symptoms, often being bypassed and diagnosed incorrectly by professionals. ...read more.

There are many conclusions and with frequent discrimination against these theories. There are a variety of factors in the risks of Schizophrenia, these include: * genetic susceptibility * drug abuse (specifically from a young age) * prenatal or birth complications * seasonal variation of birth * immigration status and ethnicity * urban birth and upbringing * social isolation/adverse events * slightly higher rates in males To some extent Schizophrenia is genetic. It's of the understanding that it's inherited albeit not being created by a single gene but the genes inhabit to be influential. Throughout continuous studies it has been recognised that Schizophrenia is confidently inheritable, one study being carried out by Gottesman (1991). Up until 1978, theoretically it was known as a functional psychosis, conformably to Gershon & Reider (1992) due to the development of the CT scan, it was used to research the brains of inveterate Schizophrenias (by Johnstone et al. at the Clinical Research Centre in Middlesex, England). This exhibited an enhanced size of the lateral cerebral ventricles (the fluid spaces in between the brain) and additional x-ray attestation confirmed less brain tissue (specifically in the medical temporal lobe), this confirmed by technology. Also showing a weakened blood flow in the frontal coretex, signifying decreased neuronal activity and post-mortems have signified that specific groups on neurons correlated in an abnormal way or entangled differently compared to non-schizophrenics. There are conclusions that there is a surplus neurotransmitter dopamine, but this evidence is inconclusive (Lavender 2000). ...read more.