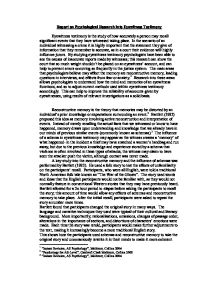 Report on Psychological Research into Eyewitness Testimony Eyewitness testimony is the study of how accurately a person may recall significant events that they have witnessed taking place. In the scenario of an individual witnessing a crime it is highly important that the statement they give of information that they remember is accurate, as in a court their evidence will highly influence jurors. By studying eyewitness testimony psychologists have been able to see the causes of inaccurate reports made by witnesses; this research can show the court that so much weight shouldn't be placed on an eyewitness' account, and can help to prevent errors occurring so frequently in the justice system. The main areas that psychologists believe may affect the memory are reconstructive memory, leading questions in interviews, and effects from fear or anxiety.1 Research into these areas allows psychologists to understand how the mind and memories of an eyewitness functions, and so to adjust current methods used within eyewitness testimony accordingly. This can help to improve the reliability of accounts given by eyewitnesses, using results of relevant investigations as a solid basis. Reconstructive memory is the theory that memories may be distorted by an individual's prior knowledge or expectations surrounding an event.2 Bartlett (1932) proposed this idea as memory involving active reconstruction and interpretation of events. Instead of merely recalling the actual facts that we witnessed or know to have happened, memory draws upon understanding and knowledge that we already have in our minds of previous similar events (commonly known as schemas).3 The influence of a schema in eyewitness testimony may appear as the witness creates a 'memory' of what happened- in the incident a thief may have snatched a woman's handbag and run away, but due to the previous knowledge and experience stored by a schema that violence is often involved in these types of attacks, the witness may claim to have seen the attacker push the victim, although contact was never made. ...read more.

However it can also be said that although the majority of misled participants chose the incorrect slide, some where still able to accurately remember the original slides and so pick correctly. This effect is applicable in the circumstance of being shown static slides, however it is questionable what effects would be observed in a real life situation.9 Another factor considered to be significant in altering memory is leading questions. Loftus proposed the theory that language used to question witnesses may have an impact on their recollection. This was demonstrated by Loftus and Palmer (1974). There were forty-five participants involved in the investigation, all of which were shown seven 5-30 second long clips of traffic accidents. After each clip they were asked to write an account of the incident and answer specific questions. The critical question was involving the speed of the vehicles "About how fast were the cars going when they *insert verb* each other?". There were five groups of participants used to demonstrate the independent variable (for this experiment the independent variable was the verb used within the critical question). For each group one of the following verbs was entered into the question: smashed, collided, bumped, hit or contacted. The results showed a positive correlation with the implied intensity of the crash and the average estimate of the vehicles' speed. So for the 'smashed' group the average speed was estimated to be 40.8 mph, whilst for the 'contacted' group the average speed was estimated to be 31.8 mph. A week later the participants were asked if they had seen any broken glass. Results showed that their answer depended on the intensity of the crash originally implied during the first stage of the experiment. Although there was no broken glass in the film footage, those from the 'smashed' condition replied 32% 'yes', and those from the 'hit' condition replied only 14% 'yes'.10 Psychologists have argued that Loftus' research is too artificial and does not truly represent how a person or witness would react in a real-life situation. ...read more.

The findings were gathered from interviewed students who had only watched video tapes and had not actually experienced a real crime. The performance of participants in this experiment was compared to that of real life witnesses in Fisher et al's (1989) study, where a group of Florida Detectives were trained to use the cognitive interview on genuine witnesses. Results from this study still showed that the information gained from the use of cognitive interview was 47%.22 So although the inaccurate results cannot be accounted for, the increased accuracy of correct items appears to be reliable. Later investigations carried out by Wagstaff (2002) show that the other key factors in improving the accuracy of eyewitness testimony are: the length of time between the event and recall, the psychological effect the event has on a witness, the familiarity of the people involved, good visibility of the incident, being in close proximity to the incident, and the length of time the even was witnessed for.23 The study of Eyewitness testimony is so important in psychology because of the consequences of accuracy in court situations. Unreliable accounts which may be caused by reconstructive memory or schemas can result in innocent people being charge of crimes they didn't commit. By investigating why the mind changes and reconstructs memories in the way it does, psychologists can improve techniques used within the justice system to maximise accuracy. Loftus' research into reconstructive memory, misleading post-event information, anxiety of witnesses and leading questions has highlighted errors in the standard police interview method. Using the information gathered in this area, Geiselman was able to construct a better interviewing system- the cognitive interview. Although this did not decrease the amount of incorrect or confabulated answers given during the interviews, it did increase the correct items reported by witnesses by up to 47%. This has helped somewhat with the reliability of eyewitness testimony, but still so much weight shouldn't be placed on an eyewitness' account during court, due to the level of inaccurate or confabulated information still present. ...read more.