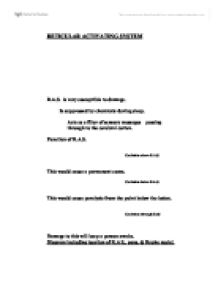 RETICULAR ACTIVATING SYSTEM R.A.S. is very susceptible to damage. Is suppressed by chemicals during sleep. Acts as a filter of sensory messages passing through to the cerebral cortex. Function of R.A.S. Cut/lesion above R.A.S. This would cause a permanent coma. Cut/lesion below R.A.S. This would cause paralysis from the point below the lesion. Cut/lesion through RAS Damage to this will keep a person awake. Diagram including location of R.A S., pons, & Raphe nuclei. Chemical analysis of the RAPHE found SEROTONIN. (This was investigated to find a cur for coma victims). Serotonin is a neurotransmitter. This acts an inhibitor on the R.A.S. This leads to a gradual decrease in arousal. This is the mechanism for falling asleep. R.A.S. is also inhibited by nor-adrenalin, released by the pons. This closes the RAS system down further. Noradrenalin acts as and exitory agent on motor/sensory pathways and could cause REM/dreaming sleep. Havever found a system which reinhibits the motor pathwau after it has been stimulated by noradrenalin. (This stops you acting out your dreams.) He damaged this area in animals and they seemed to act out their dreams. (see animal experiments.) 2 There is a lot of complex bio-chemistry in the base of the brain controlling sleep. ...read more.

This time is spent sorting through new data and updating existing memory systems. A number of studies have shown that REM sleep increases following mental activities of a complex nature. Herman & Roffwarg 1983, also supported Evan s theory. In their study participants wore distorting lenses during their waking day. These made everything appear upside down. This took a great deal of mental effort to adjust to. 5 Sup. for Evan s theory cont. Herman& Roffwang 1983 cont Subsequent monitoring revealed an increase in periods of REM sleep. Evan s theory has also been supported by the findings of older people spending shorter periods dreaming. * * * * * Neurobiological Approach HOBSON & McCARLY 1977 Activation synthesis Theory of Dreams They proposed that dreaming begins with the random firing of giant cells, located in the R.A.S. of the pons, which in turn activate adjacent nerve cells. These include those concerned with vision, motor activity and emotion. This activity also reduces the tone of major muscles, producing temporary paralysis. This prevents us acting out our dreams. Morrison 1983, found that cats with damage to the brain stem actually chased the subject of their dreams and ignored real mice. Although the body is not moving, the cerebral cortex is still receiving information, originating from the giant cells, which suggests it is. ...read more.

This would explain why most dreams are forgotten. These schools of thought have been challenged by each other. The neurobiological theorists argue that the problem solving approach cannot explain why some dreams are not related to problem solving at all. It also cannot explain why non-human animals dream. They also point out that psychological theories offer little or no explanation about the physiological processes involved. Psychological theorists argue that the contents of most dreams are significant and therefore we would not benefit by forgetting, as proposed by reverse-learning theory. Also, modern connectionists theories suggest we have no need to save space, as we have a vast potential for information storage. Neither of the theories can explain why patterns resembling REM sleep are found in developing foetuses. Solving problems or sifting out useless information seems an unlikely requirement for a cocooned foetus. Jouvet believes that the activity of nerve cells during REM sleep is a code that activates information stored in the genes. All research on REM and dreaming conducted in laboratories must be viewed with caution, as it may not reflect dreaming in a natural setting. Also during REM studies, the waking up of at intervals may have caused other effects such as the disruption of hormone or neurotransmitters, therefore the effect of REM deprivation cannot be isolated from other factors. Because of the difficulty in testing these theories neither, at present, can be fully rejected or accepted ...read more.