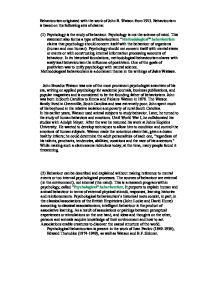 Behaviourism originated with the work of John B. Watson from 1913. Behaviourism is based on the following sets of claims: (1) Psychology is the study of behaviour. Psychology is not the science of mind. This statement also forms a type of behaviourism: "Methodological" behaviourism claims that psychology should concern itself with the behaviour of organisms (human and non-human). Psychology should not concern itself with mental states or events or with constructing internal information processing accounts of behaviour. In its historical foundations, methodological behaviourism shares with analytical behaviourism the influence of positivism. One of the goals of positivism was to unify psychology with natural science. Methodological behaviourism is a dominant theme in the writings of John Watson. John Broadus Watson was one of the most prominent psychologist scientists of his era, writing on applied psychology for academic journals, business publications, and popular magazines and is considered to be the founding father of behaviorism. John was born in South Carolina to Emma and Pickens Watson in 1878. The Watson family lived in Greenville, South Carolina and was extremely poor. John spent much of his boyhood in the relative isolation and poverty of rural South Carolina. In his earlier years, Watson used animal subjects to study behavior. Later, he turned to the study of human behaviors and emotions. Until World War I, he collaborated his studies with Adolph Meyer. After the war he resumed his work at Johns Hopkins University. ...read more.

Instead, we are characterizing the person in terms of what he or she might be doing. Analytical behaviourism traces its historical toots to the philosophical movement known as Logical Positivism. Logical positivism proposes that the meaning of sentences used in science be understood in terms of the experimental conditions or observation that verify the truth. Analytical behaviourism may be found in the work of Gilbert Ryle (1900-76) and later work of Ludwig Wittgenstein (1889-51). Behaviorism was an immensely popular research program or methodological commitment among students of behavior from about the second decade of the twentieth century through its middle decade. Behaviorists created journals, organized societies, and founded psychology graduate programs reflective of behaviorism. Behaviorists organized themselves into different types of research clusters, whose differences stemmed from such factors as varying approaches to conditioning and experimentation. Behaviorism generated a type of therapy, known as behavior therapy. It developed behavior management techniques for autistic children and token economies for the management of chronic schizophrenics. It fueled discussions of how best to understand the behavior of nonhuman animals, the relevance of laboratory study to the natural environmental occurrence of behavior, and whether there is built-in associative bias in learning. One major difference between mentalistic (mental states in-the-head) and associationist or conditioning accounts of behavior is that mentalistic accounts tend to have a strong nativist bent. This is true even though there may be nothing inherently nativist about mentalistic accounts. ...read more.

Behavioral theorists emphasize that behavior is a result of a process of learning from observing. Another difference is found when you look at research methods. Psychoanalysis is based around introspection and as such has very little research, due to the fact that the theory has very little testable data, it can neither truly be proved nor disproved. Behaviorism tested and researched ideas before they were published, all of the research was directly observable and testable, this was due to the basic aim of behaviorism, which is to produce analyzable and scientific results. I do not think that Behaviorism, as theory, can be proven correct or incorrect, as long as lots of its elements are useful and effective in modern life. I do not agree with some ideas, like Watson's idea that psychology should study only observable behavior, because I think that there is much more to human personality than behavior. I believe this because people act different when they know they are being watched, or even when they are in the presence of other people than when they are alone. Some people might decide to act in a certain way to prove a point, hide their weaknesses, or hide their true personality. So, the scientific results might not always be reliable. Even so, I do think that a lot of psychology hypothesis come from observing human and animal behavior. Psychologists will constantly expand theories and critics will continue, for as long as people will have different opinions. ...read more.