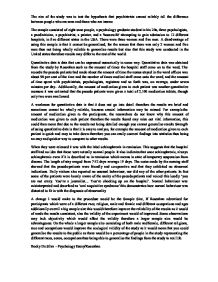 The aim of the study was to test the hypothesis that psychiatrists cannot reliably tell the difference between people who are sane and those who are insane. The sample consisted of eight sane people, a psychology graduate student in his 20s, three psychologists, a paediatrician, a psychiatrist, a painter, and a 'housewife' attempting to gain admission to 12 different hospitals, in five different states in the USA. There were three women and five men. A disadvantage of using this sample is that it cannot be generalised, for the reason that there was only 2 women and five men thus not being wholly reliable to generalise results but also that this study was conducted in the United states therefore results may differ to the rest of the world. Quantitative data is data that can be expressed numerically in some way. ...read more.

For example the amount of medication given to the participants, the researchers do not know why this amount of medication was given to each patient therefore the results found may miss out vital information, this could then mean that due to the results not being detailed enough you cannot generalise results. Strength of using quantitative data is that it is easy to analyse, for example the amount of medication given to each patient is quick and easy to take down therefore you can easily convert findings into statistics thus being an easy and quicker way to compare to other results. When they were released it was with the label schizophrenia in remission. This suggests that the hospital staff had no idea that these were actually normal people. ...read more.

which were of a different race, religion, male and female and different occupations and ages additionally overall a big sample size this would therefore improve the reliability of the results as it would of made the results consistent, also the validity of the experiment would of improved. Some observations may lack objectivity which would affect the validity therefore a larger sample size would be advantageous. On the whole a larger sample size consisting of both male and female, different religions, race and occupations would improve the ecological validity of the study as it would mean that you could generalise the results to the public as there would be a percentage of people in the study representing the different races, sexes, occupations thus being able to generalise the findings from the study to real life. Becky Da Silva - Psychology Essay/Rosenhan ...read more.

A fascinating and important topic. The essay goes some way towards identifying some of the key issues with some irrelevant or undeveloped points. 3*