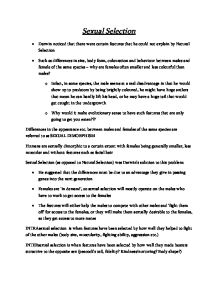 Sexual Selection * Darwin noticed that there were certain features that he could not explain by Natural Selection * Such as differences in size, body form, colouration and behaviour between males and female of the same species - why are females often smaller and less colourful than males? o Infact, in some species, the male seems at a real disadvantage in that he would show up to predators by being brightly coloured, he might have huge antlers that mean he can hardly lift his head, or he may have a huge tail that would get caught in the undergrowth o Why would it make evolutionary sense to have such features that are only going to get you eaten??? Differences in the appearance etc. between males and females of the same species are referred to as SEXUAL DIMORPHISM Humans are sexually dimorphic to a certain extent with females being generally smaller, less muscular and without features such as facial hair Sexual Selection (as opposed to Natural Selection) was Darwin's solution to this problem: * He suggested that the differences must be due to an advantage they give in passing genes into the ...read more.

and does not have parasites (is healthy). The fact that he is capable of all this also suggests that he has good genes, so will be a good choice to share her genes with 2. Good Taste School (Fisher, 1930's) * Fisher suggested that the preference may have started with 'good taste' - where the female was choosing the best mate and best genes * However, this then underwent a 'runaway process', where the original reason for admiring the feature was 'forgotten' and the features became a 'fashion accessory' * Females blindly chose males with more and more exaggerated versions of the feature, until it ceased to indicate it's original meaning * For the male, the biological expense of producing and maintaining the feature becomes such a disadvantage this it outweighs the advantages of attracting more mates * However, the feature is still necessary to attract females (who will want to pass it onto THEIR sons, in order to get genes into the NEXT generation) and so will continue It has further been suggested that females look for slight handicaps in males as a sign of 'strength' - if a male can survive even with this huge tail, then he may have really excellent capabilities in all other aspects. ...read more.

has to defend the females), but the male needs only small testis and to make a small amount of sperm per ejaculate - as he has no other competition. Gorillas are an example of this * Animals where males and females have access to each other freely require large testis and produce large amounts of sperm - chimpanzees are examples * In orang-utans, one male has to fight continually to secure his females and there is always the chance that another male may gain access. Testis size is smaller than in chimps but larger than in gorillas * In humans, the male testis is similar in proportionate size to that of the orang-utan, but they produce more sperm o This suggests that humans have evolved for one male to compete to possess a small group of females o However, other males may still possibly access the females, either willingly or by force - so it is still necessary to ensure that enough sperm are produced to increase the 'owner's' chance of fathering any children - especially seeing as it is he who is going to be providing resources and care for it ...read more.

Shows knowledge and understanding of the topic. Evaluation is evident although more research to assist with evaluation at more depth is suggested. 3*